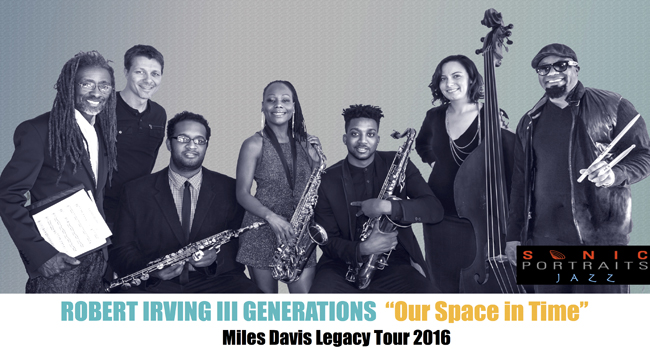 With an incredible history, including numerous collaborations with Miles Davis, musician and producer Robert Irving III is continuing to live a life creating and promoting music and its history. Irving was exposed to the world of music at an early age in his hometown of Chicago.

“I came from a big gospel music family on both sides,” he said.

Gospel music led to an early interest in organs and pianos, but his first musical training came with the bugle. His knowledge of that instrument led to his recruitment into the Robert Taylor Drum & Bugle Corps as a teenager. He was drafted into the brass program at DuSable High School, entering into a group that had spawned jazz luminaries such as Nat ‘King’ Cole and Johnny Griffin. By the time he transferred to Hirsch High School, he was playing multiple brass instruments.

It was at Hirsch that Irving would solidify the path that would eventually lead him to Miles Davis. His band teacher, George Hunter, was in a big band called The Moonlighters, a group which spawned the horn section for Earth, Wind & Fire. It was the same teacher who also emphasized the importance of piano to Irving.

“That band teacher stressed if you’re serious about your horn, you want learn piano,” Irving said.

He would spend his time after school learning piano from Hunter. This gave him what he referred to as “the big picture of musical shapes,” educating him in scales, chords and progressions that would apply to all of his future pursuits in music.

“That set a precedent and a discipline for me,” Irving said. “I was playing any song that I heard in all 12 keys.”

Robert Irving III would find his way to North Carolina, where he became very popular for his unique jazz skills in a region where radio emphasized gospel, country and rock. There he would form a Top 40 band called Your Mama that would grow increasingly popular due to their regular playing of Earth, Wind & Fire music. He educated himself in music through practice, performance and study of orchestration and arrangement while pursuing a degree in business.

“I felt that music is a business and that would be supportive of that side of what I needed to do as a music business entrepreneur,” Irving said.

He would return to Chicago after eight years, where Your Mama’s reputation and his previous connections with Earth, Wind & Fire would lead to the next step in his career. While attending a birthday party for the wife of keyboard player Larry Dunn, Irving was heard playing by Miles Davis’ nephew, Vince Wilburn Jr. Wilburn invited Irving to replace his departing keyboard player in his band, Data. Miles Davis, after hearing the demo, in particular a composition by Irving called “Space,” invited him to join him to record in New York.

Irving would end up spending two months with Davis, recording all day to help him develop new music. The result of those sessions led to the Miles Davis comeback album, “The Man With The Horn” in 1981. Irving described the surreal nature of his involvement in the project.

“I had no idea, no plans to do anything close to playing with Miles Davis,” he said. “It was absolutely like being on top of the world.”

The collaborations would continue with Davis’ next album and a tour. His work would eventually put him into position as the musical director for the band. He and Miles would listen to recordings of performances together and he would apply the notes with the band at the next soundcheck.

“Miles didn’t do rehearsals and he didn’t do sound checks,” Irving said. “He needed someone to delegate.”

Stepping into that role has influenced Irving’s music to this day, where he still reviews rehearsal tapes to catch the nuances and make the needed course corrections he may miss during live performances.

Robert Irving III’s career would continue to expand as he became in demand as a producer. As health issues brought about what appeared to be the end of Miles Davis’ career, Irving dove into producing. He was surprised to receive a phone call from Davis’s manager inviting him back to join a recovering Davis on tour. Circumstances, both due to scheduling and musical divergence, forced Irving to decline.

“I guess this is it,” Irving said. “It was sort of a bittersweet thing.”

They kept in touch, but did not work directly together again. Since the death of Miles Davis in 1991, Irving has worked to help honor and maintain his legacy through a number of tribute and alumni bands. He noted the current lack of attention placed on Davis in our culture and his hope to be a part of bringing it back to relevance. His band Generations is one way of accomplishing that goal. The group, which started as a Miles Davis tribute band, came out of the suggestion from Irving’s wife that he incorporate the kids he was teaching into a live band. They have since expanded into a vehicle for Irving’s own compositions.

“It sort of became our way of extending the Miles legacy,” he said. “It helps to bring that legacy forward.”

Irving is working on bringing that legacy to listeners in a number of ways this year, which would have been Miles Davis’ 90th birthday and the 25th anniversary of his death. Locally, Generations, along with trumpet player Corey Wilkes, will be playing at the Lighthouse Jazz Festival in Michigan City on July 9. He also continues his work with a number of other projects, including his record label, Sonic Portraits. Information on the festival can be found at lighthousejazzfestival.com and the rest of his work at sonicportraitsjazz.com.