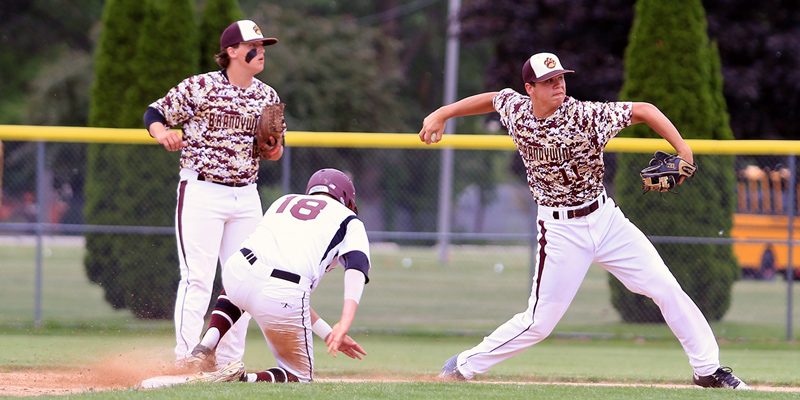 BERRIEN SPRINGS — Buchanan baseball coach Lonnie Hoover liked the way his team was hitting at the end of the regular season.
Hoover saw those bats come alive again in the sixth inning of Saturday’s Division 3 district final against Bridgman.

Behind a six-run sixth inning, the Bucks rallied to beat the Bees, 10-4, to claim their second straight district title. Bridgman led 4-3 entering the sixth.

Buchanan, which improved to 20-8, advances to play Grand Rapids West Catholic at noon Saturday at the Bridgman regional.

“The last week of the regular season we started hitting the ball,” said Hoover, who led the Bucks to the state championship game last year. “It continued today. We put the ball in play a lot and we forced (Bridgman) to make some plays.”

Jarrett Thomas, Gavin Morris and Christian Hall each had an RBI single in the sixth for the Bucks. The final three runs came after a Bridgman error on a fly ball hit to right field.

“We’re being more aggressive at the plate,” Hoover said. “Pretty much all season we were taking too many good pitches and getting behind in the count.  We pounded into the kids that they needed to be more aggressive and to jump on the first pitch if it’s there. They’ve been responding pretty well.”

Bridgman led 3-0 after the first inning, but Buchanan refused to let the Bees hold on to the lead for long. The Bucks scored three in the top of the second to tie the game. In that inning, Buchanan got an RBI triple from Thomas and RBI double from Darren Shearer and a sacrifice fly from Kyle Leazenby.

Zach Ott’s RBI single gave Bridgman its last lead of the game at 4-3 in the bottom of the second.

“What can you say about Lindamood,” Hoover said. “He battled in there. He’s typically a slow starter. If we can get him through a couple of innings of giving up some runs and some hard hit balls he seems to be able to settle in nicely and throw well the rest of the way.”

Buchanan advanced to the finals after taking advantage of Brandywine mistakes and beating the Bobcats, 10-2, in a semifinal game.

Only one of the Bucks’ runs were earned as Brandywine finished with six errors.

“I’m not sure (Buchanan) earned that one out there,” Brandywine baseball coach Dave Sidenbender said. “We kind of gave them everything. I’m amazed they had one earned run. We just didn’t field the ball today. If we would have fielded the ball it would have been a different game.”

The Bobcats responded with a two-run fourth with the key hit being Joe Covyeau’s RBI single.

Brandywine had chances to take the lead. With runners on second and third with one out in the fifth, the Bobcats failed to execute a suicide squeeze bunt. The runner at third was tagged out after the bunt didn’t get laid down.

Trailing 4-2, the Bobcats had runners on first and second with one out in the sixth. A runner being picked off of first and a strikeout ended that threat.

“(Buchanan) made a good pitch,” Sidenbender said in regards to the  suicide squeeze. “There’s nothing we could do. I didn’t think it was bad base running at all. We feel asleep (on the pickoff).”

The Bucks put the game away by scoring six unearned runs in the sixth inning. Dalton Riddle had a two-run triple in that inning for Buchanan.