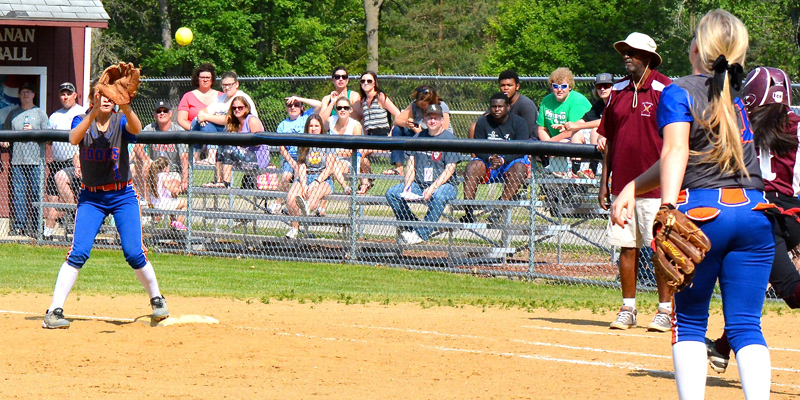 Edwardsburg’s Ali Strycker and Buchanan’s Sammi Luzadre made an impact on the mound and at the plate in Tuesday’s softball doubleheader between the Eddies and Bucks.

Strycker pitched a three-hitter, struck out 12 and had two hits and an RBI in the Eddies 3-0 win in game one. She also collected three singles in game two, but Edwardsburg fell to Buchanan, 14-3. Luzadre led the Bucks in the second game as she hit two, three-run homers and allowed five hits and one earned run in picking up the win.

“The pitching was a little different in each game,” Edwardsburg softball coach Randy Brooks said. “I thought Ali threw really well and our other two pitchers struggled a little bit and (Buchanan) is a good hitting team. If you don’t hit your spots and throw on the corners and pitch up and down (Buchanan) will hit the ball and they did.”

In the opener, Edwardsburg scored an unearned run in the fourth inning and added two runs in the fifth. Strycker had an RBI triple and Layne Stinnett added an RBI single in the fifth.

Maddie Hemphill pitched well in defeat for the Bucks. She struck out five and allowed six hits.

The Eddies got off to a good start in game two, jumping out to a 2-0 lead, but the lead didn’t last. Buchanan scored six runs on six hits in the second inning with the highlight of the inning being Luzadre’s three-run homer.

Another three-run homer from Luzadre highlighted the Bucks eight run fourth inning. Emma Schmidt added an RBI double, while Taylor Reed and Jayla Bibbs each had an RBI single in the fourth for Buchanan.

“That’s a heck of a ball club over there,” Buchanan softball coach Mike Welsh said. “We played good ball in the first game too. We did what we were supposed to do (in game one) we just didn’t get the key hit. We’re playing pretty good right now.”