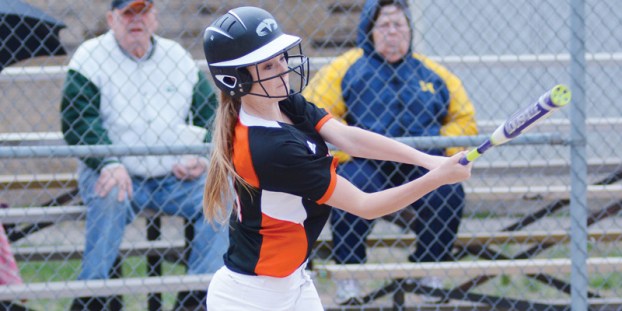 Smith does not officially get credit for the cycle, which consists of a player collecting a single, double, triple and a home run in the same game. Smith needed both games to complete the feat.

In the opening game she went 2-for-3 with a single, a home run and an RBI. In the nightcap she was 2-for-4 with a double, triple and an RBI.

“We continued to play good defense and have quality at bats today,” Dowagiac coach Mike Behnke said. “This is the kind of ball we need to play to beat the good teams. We made every defensive play and hit the ball hard and drove it to the gaps for extra bases.

“Amiyah even hit for the cycle in the doubleheader, which is cool to see.”

Winning pitcher Taylor Hulett had a pair of doubles and three RBIs, while Alyssa Allen and Kailey Fear both had two hits. Allen doubled and drove in a pair of runs. Also driving in two runs were Megan Soderbloom and Mickie Kiggins.

Marissa Dodd was 3-for-3 with a triple.

In the second game, Hulett, Kiggins and Allen were all 3-for-4. Kiggins drove in three runs and Allen two. Fear and Hannah Whitaker also drove in a pair of runs.

To say the task was a tall one for the Dowagiac soccer team in its home and regular season finale... read more