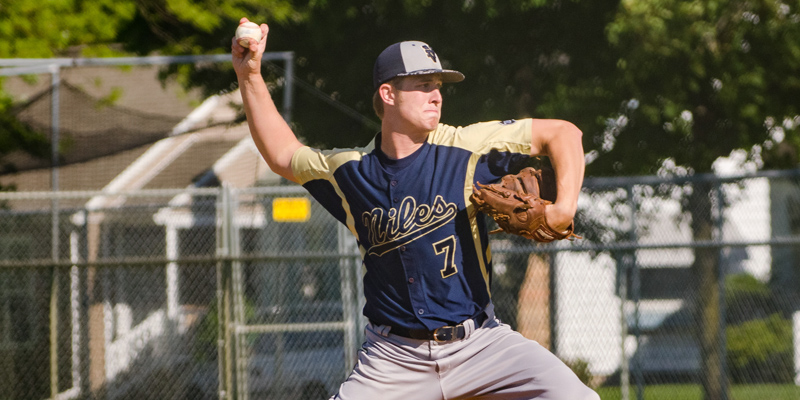 It was a makeup of the second half of a doubleheader. The Vikings beat the Huskies 5-4 in 14 innings April 27 on Jake Lalone’s walk-off single, but there was not enough daylight left for a second game.

Niles (12-10, 3-7) scored its run Wednesday in the first inning when Drew Huffman walked, stole second base, went to third on Cody Glick’s infield single and scored on an error.

Three hits and two Niles errors helped the visitors in the fourth. Ryan Beadle singled to left and Grant McNally was hit by a pitch to open the frame.

After a single by Mike Lincoln (his second of three hits), Noah Hecht put the ball in play and an error allowed Beadle and courtesy runner Andy Barta to score and give the Huskies a 3-1 lead.

Lights-out left-hander Henry (5-0), a University of Michigan signee, pitched a hitless fourth, fifth and sixth inning with seven strikeouts. He hit 88 mph on the radar gun in the fourth inning.

Niles chased him in the sixth inning back in April, but he was in command Wednesday.

Jacob Ham absorbed the loss for the Vikings.

Niles coach Mike Vota shared that his postgame talk with his team included a conversation about body language and how to handle slumps and adversity.

“We need to compete,” Vota said. “Right now, I’m not happy with the way we’re reacting to those situations. We’re playing to stay in games, but we’re not competing up and down our lineup and consistently enough to win games.

“Call it a killer instinct, a belief, playing for the guys around you and not just yourself. We need to show a lot of improvement over our last couple of weeks to get where we want to be.

“I’m very confident in our kids and I know the ability is here. If we can re-adjust our mindset, we’re going to be just fine.”