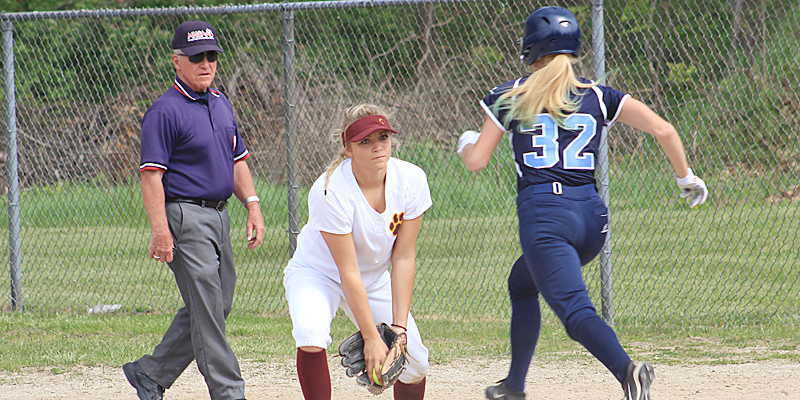 Brandywine senior Sydney Carlson records an out at first base against Comstock Tuesday. The Bobcats and Colts split a BCS doubleheader. (Leader photo/RON HARNER)

In the opener, the Colts upended the Bobcats, 10-3.

“They stepped up at the plate,” said Brandywine softball coach Ron Hartline, who’s the twins father. “When your seniors step up it’s contagious. It gets the other kids fired up. There was a night and day difference between the first game and the second game when it came to our hitting.”

Makenna Hartline’s grand slam in the second inning gave the Bobcats a 4-2 lead. Makenna’s RBI double highlighted a five-run third for Brandywine, which gave the hosts a 9-4 lead. Two of the five runs were unearned as Comstock committed three errors in the inning.

“I expected them to split the doubleheader,” Ron Hartline said about how he felt after losing game one. “They had to dig deep and find a way to do it.”

In game one, Comstock jumped out to a 4-0 lead in the first inning. Abby Schreiner’s three-run homer extended the visitors lead to 9-0 in the fourth inning.

Michaela Hartline had an RBI double and Nicole Sachman added an RBI single for Brandywine.

STEVENSVILLE — A lack of offense continues to plaque the Niles softball team.

The Vikings (6-22) managed just five hits in both ends of the doubleheader as the Lancers defeated Niles 7-0 and 12-2 in SMAC West Division play Tuesday.

Caitlyn Daly tripled for the Vikings in the first game, while Brooke Timm doubled in the nightcap.

The host Bucks swept a BCS doubleheader from Parchment 9-1 and 7-3 Tuesday.

Sammi Luzadre and Ali Kyle both doubled for Buchanan in the opening game, while in the nightcap, Alyssa Florey had a double.