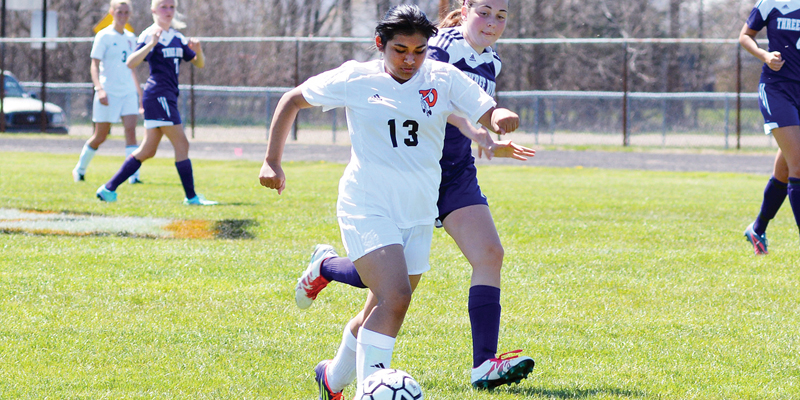 Anayda Lucio (13) has helped give Dowagiac depth at different position this season with her play in the midfield. (Leader file photo/SCOTT NOVAK)

With just three matches remaining in the regular season, the Dowagiac soccer team is beginning to turn its attention toward the post season.

The Chieftains are just 2-11-2 this year and 0-7 in the Wolverine Conference following a 5-0 loss to visiting Sturgis Monday.

“Overall, we have to get healthy,” he said. “We had to make some changes to today’s rotation due to injuries and we just have to get back to the basics.”

Sturgis was able to take advantage of those changes to open up a 3-0 halftime advantage on a pair of goals by Emma Borland and a goal by Morgan Pueschel.

Borland and Pueschel scored the two second half goals for the Trojans as well.

Haines is hoping that playing the likes of Sturgis and tonight’s opponent, Otsego, will help prepare the Chieftains for the post season.

“Playing an extremely tough Wolverine Conference schedule has showed us how we have progressed so far this season,” he said. “Our results have been on both ends of the spectrum and we are working to make our way to the district final on June 4.”

In order to achieve that goal, Haines said his team needs to work on possession of the ball and building through the central midfield.

“Our defense has done its job throughout the season and we have been able to work on wide play,” he said.

And there is more to the team’s story and its record.

“Our younger players have really stepped up this year,” Haines said. “Freshman Kellyn Daly leads the team in goals and the midfield play of Anayda Lucio has given the team added depth in different positions. Also, goalie Grace Younger has now eclipsed the 200 save mark on the year with at least five games left to play.”

The Chieftains travel to Otsego tonight for a Wolverine Conference match before hosting Coloma at 5 p.m. Friday and Paw Paw in their league and regular season finale at 5 p.m. Monday.