Kristie DesRosiers, a mother of four who joined the fledgling church when it was still on Mill Street, grew up in Edwardsburg, went to high school in South Bend, moved to the Decatur area for her husband’s job in Kalamazoo, works at Borgess-Lee Memorial Hospital and teaches at Southwestern Michigan College.

“We’ve been here five years because we had our first Ryan’s Revival in this church,” the 10-year member said Monday.

She well remembers Ryan, the outgoing son of Walter and Tracy Y. (Siler) Saylor who never knew a stranger.

“When I went to his funeral,” DesRosiers said, “young people’s tend to be large because they have a lot of friends. But his even surprised his mom and dad.”

He and his father were baptized together in the creek, and he followed in his footsteps operating a press at National Copper Products.

“They had stickers made up that you’ve probably seen around town,” DesRosiers said. “Jesus fish stickers with his name in the middle in Dowagiac colors. Tracy will see them in Niles, Elkhart or Mishawaka. She’s like, ‘I don’t even know who these people are, but they have my son’s funeral stickers on their cars.’

“It really struck me how far-reaching Ryan’s life was,” she said. “He touched so many people in this community and in neighboring communities. That’s a real picture of the Gospel to me. Ryan loved people and never knew a stranger. If something was wrong, he had a desire to make it better and make people experience joy. He was an inclusive young person. He didn’t have an exclusive clique. He was very special. Two things can happen when you survive burying a child. Marriages or families can fall apart, but Ryan’s passing drew his family closer together.”

“What a picture of the church and what we are supposed to be,” DesRosiers said. “Ryan’s life is a really good testimony to that. Ryan’s Revival to me reminds us of the love we are to have for our neighbors. We have a heart to serve this community and neighboring communities for the Lord Jesus Christ.”

She fondly recalls Ryan’s interaction with her second son, baby Brady, who’s almost 6. “I really cherish that moment because he died right after that,” she said.

Worshippers come from as far as Pullman, Fennville and Buchanan to attend the church pastored by Mark Saylor, a 1990 Decatur graduate who works a fulltime job at Kalamazoo Valley Community College while juggling his family and college coursework to finish a degree.

“I feel like God has drawn certain people into Liberty Chapel,” she said.

She could count herself among that number, since she stumbled on it while taking ballet classes at Encore in the old Lincoln School.

“I must have passed down Mill Street a thousand times going back and forth between my house and the dance company,” she said. “One day this little white building caught my eye. It almost jumped out at me. I’d never noticed it before until that day. My husband and I had been trying various churches every weekend to find a home church. It was Labor Day weekend and it looked closed. Mark’s dad, John Saylor, came running out. There were three people there. Mark was on vacation, so his dad preached for him. I hadn’t even met Mark and I knew I was home, where the Lord led me to be.”

“Now, if we had everybody who has darkened the door of Liberty Chapel” came inside at once, “we couldn’t house them all. They ebb and flow, come and go. For a while we ran about 100, but Sunday we had about 50. We’ve had people see us on the internet and come up from Tennessee. This is a lot bigger. Mill Street was on one level.”

The Pentecostal church has explored larger locations, from McKinley School to the former site of Jessup Door, as it closes in on paying off its current location.

It ministers at the Cass County Jail.

“Those are the people who are broken and lost and don’t feel they have anywhere to turn,” DesRosiers said. “We want to be their beacon and have a real impact in a positive way. We’re tucked away in this little neighborhood, but young people really respond to our music ministry.” 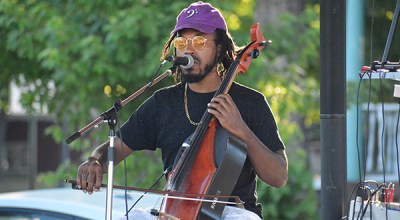