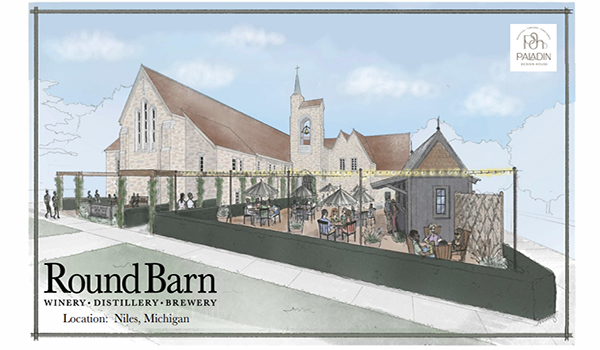 The City of Niles Planning Commission approved both a resolution rezone the property occupied by the former Grace United Methodist Church, 501 Grant St., which would change the property’s zoning designation from Low Density Residential to Office Commercial District to accommodate The Round Barn’s proposed Grant Street Pub, as well as a resolution approving its site plan.

The commission signed off on the rezoning request from Matt Moersch – CEO of Moersch Hospitality Group – which owns and operates Round Barn Winery, Tabor Hill Winery and Restaurant, Free Run Cellars and Round Barn Brewery and Public House. Moersch said the proposed restaurant and pub, an estimated $1-2 million project, will act as a spot for the community to congregate and enjoy pub-style fare, live music, outdoor beer garden, and award-winning craft beverages.

The property has a 61-space parking lot, with a property capacity estimated to be  between 180 to 220 guests. In addition, the project is expected to create 40 to 50 jobs in the community. If everything goes according to plan, Moersch hopes to open Grant Street Pub in the late 2023 or the spring of 2024.

The resolution was passed seven to one, with many commissioners and community members in attendance eager to welcome Round Barn into the community.

“I’m all for it,” said commissioner Laura Hollister. “Professionally, it could be considered competition but I’m excited about it.”

Commissioner John Pulling casting the dissenting vote. Pulling, who lives on Union Street in close proximity to the property, believes that the business would cause an increase in traffic that would be detrimental to the neighborhood’s quality of life.

“It’s going to be very heavily trafficked,” he said. “That light (at the intersection of South Lincoln Avenue and Grant Street) is not going to be able to hold up to it. There’s going to be massive traffic issues… I don’t care about it being a church or what they’re doing. I love Round Barn; I just think that is the worst location on the west side. In a quiet residential neighborhood, to put a business that’s open till midnight and you’re going to have people outside drinking in a quiet residential neighborhood driving home with horrible traffic outside their front door.

Commissioner John DiCostanzo disagreed with the notion that the traffic would be a significant issue, saying that the property generated more traffic than the proposed Round Barn would when the church was active.

I can’t see that this is going to create any change from itss original use,” he said. “The traffic around restaurants is pretty fluid at different times of the day, so I don’t have any great concerns about the traffic.”

Petra Weber, of Niles, lives next door to property and expressed concerns about her property value decreasing if Round Barn were to purchase the property, as well as parking. Ric Huff addressed her concerns, saying that the rezoning would allow her property to continue use as a home while expanding the opportunity for her to use the property in the future for other purposes, adding that the board could also potentially rezone the requested church properties and leave her property zoned as single family residential.

Originally constructed in 1953 and located on the corner of Grant and Lincoln, the former church features vaulted ceilings, high arches, and stained glass. Moersch said Round Barn has already invested $20,000 into the project and believes the unique space is the ideal location for guests to gather and experience Round Barn’s highly acclaimed brand of hospitality.

“Thank you for your support,” Moersch said. “The city has been welcoming. It’s very exciting to see a community that’s in support of a dream that you’ve been kind of marinating on for several years, so I’m very excited about this project.”