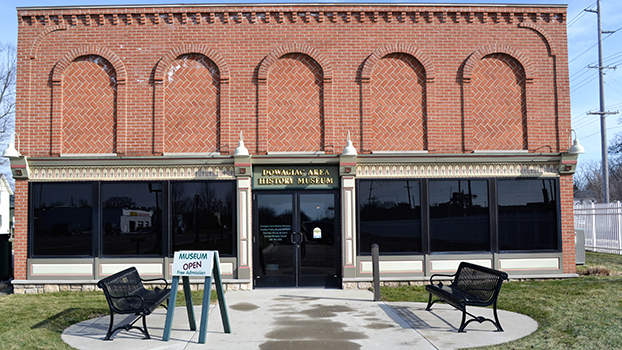 DOWAGIAC — A local history museum is one step closer to upgrading its facilities.

During its meeting Monday at City Hall, the Dowagiac City Council approved a resolution authorizing a Pokagon Fund Grant application for $10,000 to fund the construction of a storage building for the Dowagiac Area History Museum building.

The approval comes after SMC recently gave notice that it no longer wants to store the area historical artifacts that they have collected so that space can be used for other school purposes.

In 2012, SMC decided to close its local history museum on campus. At the time of its closure, SMC had more than 20,000 artifacts donated by community members. The City of Dowagiac then took over the operation of a new museum within the city limits. According to a report from Museum Director Steve Arseneau, the original agreement called for SMC to retain ownership of the collection while giving the Dowagiac Area History Museum full access to use the collection in its exhibits and that the college would continue to house the artifacts not on display in a storage room on the SMC campus.

After reviewing space options, the city and Arseneau determined the best alternative would be to add storage space on to the north end of the DAHM. Arseneau is in the process of seeking donation and grant sources to fund the added storage space and identified the Pokagon Fund as a potential source of grant funding.

SMC has given the city and the Museum one year’s notice to find alternative storage for the collection. After discussions with city officials, Arseneau received cost estimates for a 2,000 square foot ‘pole-style’ building addition on the north side of the current structure to house the collection – as well as related costs, including HVAC, electric, security, utilities, etc. – with an ultimate cost for the addition being around $190,000.

Arseneau said the addition will be a two-story height pole-style structure with a mezzanine on the north end to provide additional storage space while allowing open areas in the front for public viewing from the glass doors in the exhibit gallery. Storage cabinetry, shelving and flat files will be moved from the storage room on the SMC campus.

“With the collection on-site, museum staff and volunteers will be able to rotate exhibits more frequently, monitor the collection’s condition and provide better public access to the artifacts, documents and photographs,” he said.