Roadrunners enjoy success on the court and mat 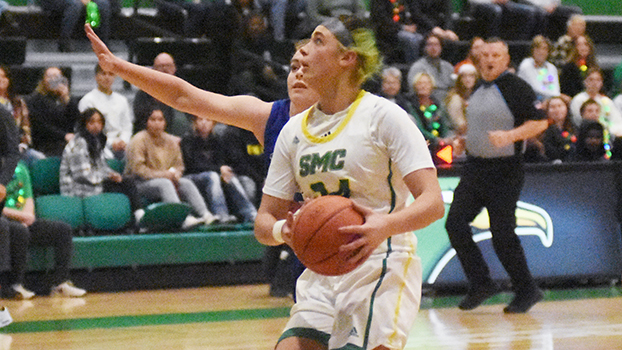 DOWAGIAC — The Southwestern Michigan College women’s basketball team ran its winning streak to three straight as it swept a pair of weekend non-conference games at the 1st Source Bank Fieldhouse.

It was a busy Saturday for the Roadrunners as the SMC wrestling team returned to action at the Harper Open in Elmhurst, Illinois. Southwestern Michigan finished third behind the University of Wisconsin-Whitewater and host Harper College.

On Friday night, Great Lakes Christian jumped out to a 23-18 first-quarter lead, but was outscored 46-33 over the final three quarters by the Roadrunners.

Southwestern Michigan outscored Great Lakes Christian 15-9 in the second quarter to take a 33-32 halftime lead. The Roadrunners stretched their advanced to 49-45 heading into the final 10 minutes of play.

Southwestern Michigan got off to a better start Saturday afternoon against Grace Christian as it jumped out to a 21-10 lead. Grace Christian cut the lead to 35-28 at halftime, but the Roadrunners responded by outscoring the visitors 24-12 in the third quarter to open up a 59-40 lead after three quarters.

Thomas scored a game-high 26 points to go along with a team-high 12 rebounds. She also had three assists. Patterson scored a career-high 14 points, while Laubach finished with 11 points and seven rebounds. Ariana Lemons (Michigan City, Indiana) added 10 points and eight rebounds.

The Roadrunners won their second consecutive contest, and fourth in its last five games, to 10-5 on the season.

Southwestern Michigan held Grace Christian to 29 points in the opening 20 minutes of play.

Niles’ Mari Nichols scored a game-high 21 points to lead the Roadrunners. He also had a team-high 13 rebounds, seven assists and six steals.

Mark Williams (Chicago) returned to the court and scored 20 points off the bench, whihle grabbing eight rebounds. Nate Goins (Niles) had 15 points, five rebounds and four assists off the bench for the Roadrunners.

It was an interesting weekend to say the least for the Roadrunner wrestling team.

Originally, Southwestern Michigan was scheduled to travel to Joliet, Illinois for the dual meet hosted by Joliet Community College. That tournament was canceled.

The Roadrunners picked up the Harper Open as a replacement. A gas leak in Harper’s gym earlier in the week forced the tournament to be moved to Elmhurst, Illinois.

Once competition was finally started, Southwestern Michigan wrestled well. The Roadrunners finished with 275 points to finish third behind Wisconsin-Whitewater (321) and Harper (302). A total of 17 teams competed in the tournament.

Southwestern Michigan had five wrestlers place in the top five, led by four-place finishers Jordan Simpson, of Dowagiac, at 125; Gabe Livingston, of Battle Creek, at 133; Jared Checkley, of Decatur, at 174; and Cole Alsup, of Coloma, at 285.

Shane Edwards, of Battle Creek, was fifth at 285.

The Roadrunners are now preparing for the biggest tournament on its schedule to date as it is getting ready to compete in the MCCAA Championships in Port Huron on Saturday.