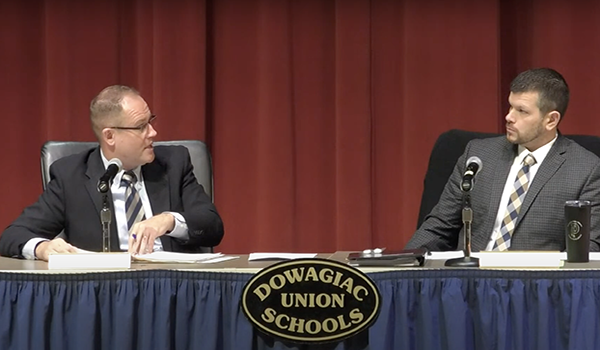 By SCOTT NOVAK and LIBERTY NEVINS

DOWAGIAC — At its annual reorganization meeting at Dowagiac Middle School Monday night, Brent Brewer was selected as the Dowagiac Board of Education president.

The meeting began with recognition and a moment of silence for Ronda Sullivan, who passed away in December. Superintendent Jonathan Whan shared some kind words about Ronda and her faith.

“Ronda’s faith was one of the strongest I have ever known. It allowed her to persevere through the storm of this life, but more importantly it let her be able to enjoy all life had to offer,” Whan said.

Following, senior representatives David and Josie from the Union High School shared their report. Exam week will take place January 18-20, with the 20th being a half day for the students. January 23 will be records day for teachers resulting in a full day off of school and the second semester will begin on January 24. Lastly, the high school will hold a parent information night on February 9 in the media center at 6 p.m. to provide supplemental knowledge about dual enrollment, the Van Buren Tech Center, and planning for future classes.

During the hearing of citizens, a concerned parent approached the podium. Angered by the lack of help received regarding the bullying of their child at Sister Lakes Elementary, the parent spoke out to the board.

“My daughter has been battered twice in the past two months … Two students came up behind her and yanked her by the back of her hair so hard that her neck hurt for 2 or 3 days,” the parent said. “She cried herself to sleep trembling that night because the girl had threatened her life.”

The parent shared that attempts to help have been made but that they have not worked to keep their child safe.

“Why can’t you guys guarantee her safety? How is she going to be safe in middle school if she can’t even be safe at tiny little Sister Lakes? … She’s been treated like an outcast, and her teachers have set that tone. She’s been humiliated by the gym teacher and her own teacher … I will not stand for it”, the parent said.

“Thank you, I appreciate that. We do take the safety and security of our students very seriously here, so I appreciate you bringing this to our attention”, Brewer responded.

In discussion items, the board set 6 p.m. Monday, Jan. 23, in the middle school cafeteria as the date and place to interview candidates for the vacant school board seat. The seat has five applicants – Christina Carpenter, Rebecca Grabemeyer, Jessica Higgins, Craig Schmidt and Kay Tularak.

The board also discussed the process for a non-homestead millage assessment. Dowagiac last passed the millage in 2018. The millage began in January 2019 and ends this year. More information will be provided next week.