Edwardsburg sweeps Portage Central in return to the court 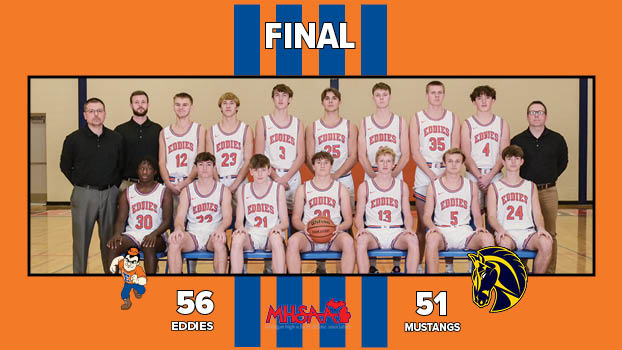 EDWARDSBURG — The Edwardsburg girls and boys basketball teams returned to the court for the first time in 2023 and swept Portage Central in non-conference action Tuesday night.

The Eddies overcame a slow start to defeat the Mustangs 36-22 in girls basketball, while Edwardsburg slipped past Portage Central 56-51 in boys basketball.

The Eddies improved to 6-3 overall with the win over the Mustangs.

Edwardsburg led 9-5 after one quarter, but stretched its lead to 12 points by halftime. The Eddies, leading 23-11 heading into the second half, outscored Portage Central 13-11 in the final two quarters as both teams struggled shooting the ball.

Edwardsburg returns to the court Friday night as it travels to Niles for a Wolverine Conference contests set to tipoff at 5:45 p.m.

Visiting Edwardsburg erased a 26-23 halftime deficit to defeat the Mustangs and square its overall record at 3-3.

The Eddies outscored the Mustangs 16-12 in the third quarter and then 17-13 in the final eight minutes to pick up the victory.

Brody Schimpa poured in a game-high 24 points to lead Edwardsburg, which also to 10 points from Will Moore and seven points from Matt Anders.

The Mustangs were led by Payton Porter’s 11 points.

The Eddies head to Niles Friday night for a Wolverine Conference contest The game is scheduled to begin at 7:15 p.m. following the girls contest.