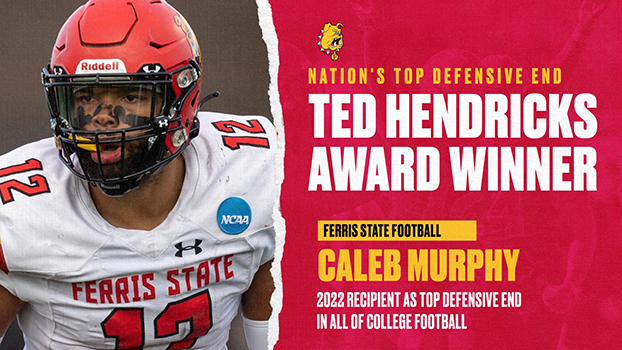 BIG RAPIDS — Ferris State University standout defensive end Caleb Murphy, who led the Bulldogs to a second consecutive NCAA Division II National Championship, has been chosen as the recipient of the prestigious Ted Hendricks Award as the nation’s top collegiate defensive end, regardless of level.

It marks the first time in the 20-year history of the award, which is presented by the Ted Hendricks Foundation, that a non-FBS player has earned the distinction. He’s the third-ever recipient from a school in the state of Michigan following in the footsteps of former Wolverines’ legends LaMarr Woodley (2006) and last year’s winner, Aidan Hutchinson (2021).

After transferring from Grand Valley State in 2021, Murphy played two seasons on the field for the Bulldogs and recorded 40 sacks, 60.5 tackles for loss (353 yards), 156 total tackles and eight forced fumbles. His teams went 9-0 in the NCAA Division II playoffs. Murphy’s accolades this season include the Gene Upshaw Award (D-II Lineman of the Year), First-Team AFCA D-II All-America, the sole defensive player named a finalist for the Harlan Hill Award (D-II Player of the Year) and GLIAC Player of the Year. He will also represent Ferris State at the East-West Shrine Bowl in Las Vegas on Feb. 2, 2023.

Murphy will graduate this winter with a degree in Criminal Justice and plans on participating in the lives of troubled young people as a role model, with the aim of redirecting them in a constructive direction. He has served as an intern in a local program for at-risk youth. He has also been a volunteer for the Special Olympics. Caleb participated in five sports throughout his development as an athlete (football, baseball, basketball, track & field and wrestling). Each discipline contributed to Murphy’s versatility as a defensive end and his work ethic. He plays the position with a quick first step and great leverage when encountering offensive linemen. He can also drop seamlessly into coverage.

After speaking with Caleb this week, here is what Ted Hendricks, the award’s namesake, had to say about his 2022 recipient:

“It is my great pleasure to welcome Caleb Murphy to our star-studded list of Ted Hendricks Award winners,” Hendricks said. “Caleb has been a tireless multi-sport athlete and a selfless leader. These skills, combined with a superior work ethic, contributed significantly to his team’s consecutive Division II National Championships. He is the total package that exemplifies the Hendricks Award. His record-setting on-field performance, academic achievement, volunteerism & dedication to improving the lives of others in his community set him apart. Congratulations, Caleb!”

The 2022 Hendricks Award trophy presentation will take place early in the year 2023 (time and place to be announced).

Murphy led the Bulldogs to the 2022 NCAA Division II National Championship this past week in McKinney, Texas, as FSU topped the Colorado School of Mines 41-14 in the title game.