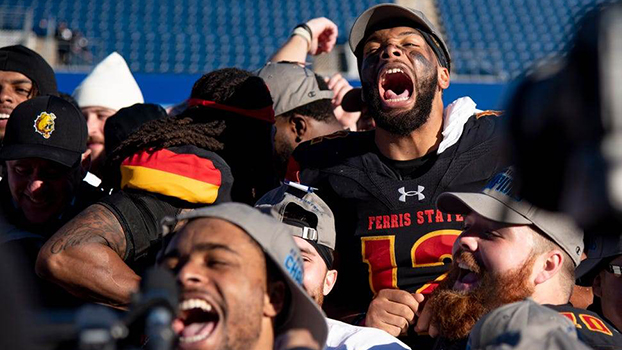 The Bulldogs put the game away in the opening half as it shutout the Colorado School of Mines 27-0 on its way to a 41-14 victory.

Top-seeded Ferris State completely dominated the Oredrillers in the contest, especially on the defensive side of the football where it held Harlon Hills Trophy winner John Matocha and School of Mines to 261 yards of total offense. The Oredrillers came into the game with the nation’s No. 2 offense, averaging more than 46 points per game.

How dominant were the Bulldogs?

Ferris State held School of Mines to 21 yards of total offense in the opening 30 minutes of the championship game. Motocha had just two completions, one of which was intercepted by Sidney McCloud and returned for a touchdown to end the first half.

The Bulldogs (14-1) finished with 485 yards of total offense, split evenly between running and passing. Ferris State ran for 214 yards and passed for 218 yards.

Marcus Taylor ran for 103 of those yards on 14 carries. Mylik Mitchell was 14-of-18 for 170 yards, while receiver Brady Rose was 1-for-1 for 48 yards. Rose was the leading receiver with five receptions for 83 yards.

Former Dowagiac standout Caleb Murphy, who was the runner-up to Motocha in the Harlon Hill voting, did not have a sack, but finished with three tackles, including 1.5 for loss. Murphy, who set an all-time NCAA record for sacks in a single season with 25.5, also led the country in tackles for loss.

“I was a little frustrated, you know, there is not much more I could have done as a defensive player to win the award,” Murphy said about not winning the Harlon Trophy. “I just went out there balled. It was pretty good to hit him out of all people because he won it. But he is a great player. I give him all the credit. He is a great ball player.”