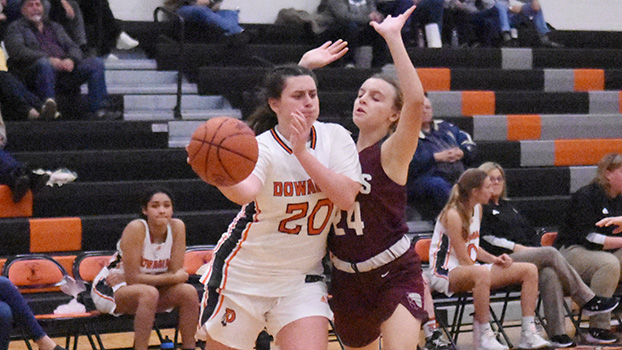 THREE OAKS — Tuesday was a good night for the three Cass County girls basketball teams that were in action.

Dowagiac traveled to Three Oaks and defeated River Valley 50-24 to square its season record at 2-2, while Edwardsburg improved to 3-2 overall and 2-1 in the Wolverine Conference with a 53-40 win over visiting Paw Paw.

In Cassopolis, the Rangers remained undefeated in Southwest 10 Conference contests with a 67-22 rout of Bangor.

After a close first quarter, the Chieftains turned up the defensive pressure and held the Mustangs to 16 points over the final three quarters to pull away to an easy victory.

Dowagiac (2-2) also got balanced scoring for the first time this season.

“Tonight was a great all-around scoring and defensive effort,” said Dowagiac Coach Jason Turner. “We had some people step up offensively tonight, which was nice to see. Faith [Green] knocked down some outside shots for us tonight and hopefully continues to build confidence. Both Marlie [Carpenter] and Josie [Lock] both had a good night offensively for us as well. They did a good job shutting down Maggie [Weller], and it was great to see the others step up. Our post players also had another great game on the boards.”

The Chieftains return to Lakeland Conference action Thursday as they host Benton Harbor.

The Eddies are back on track, having won back-to-back games for the first time in 2022-23.

Edwardsburg rallied from a 10-8 first-quarter deficit to defeat the Red Wolves. The Eddies outscored Paw Paw 15-8 in the second quarter to take a 23-18 lead into the second half.

Edwardsburg pulled away to a double-digit advantage in the third quarter and maintained it throughout the rest of the contest.

Grace Mitchell led the Red Wolves and all scorers with 17 points.

Edwardsburg returns to the court Friday to take on Otsego in a key Wolverine Conference contest. The Eddies and Bulldogs battled it out for the league championship last season.

The visiting Rangers exploded out of the gate and then cruised home with the victory Tuesday night.

The Rangers led 57-19 heading into the fourth quarter.

Lily Alcauter had eight points to pace the Vikings.