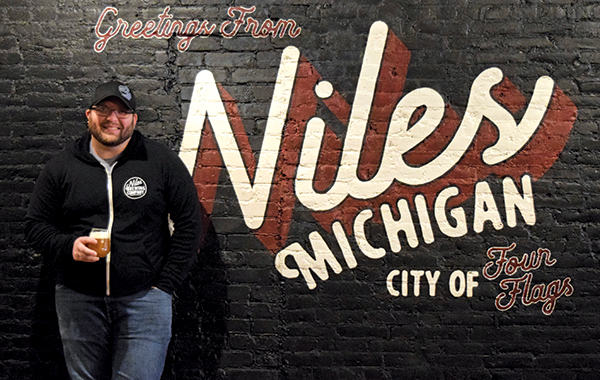 NILES — A local business will be celebrating its birthday with the community this weekend.

The Niles Brewing Company is continuing its Two-year Anniversary Celebration from 5 to 10 p.m. Friday, noon to 10 p.m. Saturday and from noon to 5 p.m. Sunday. Located at 206 E. Main St., NBC is a nano brewery that specializes in unique beers and offers unique cocktails as well as a full service bar. To celebrate two years of business, NBC is offering six anniversary beers as well as 12 special release beers made exclusively for the celebration.

The celebration means a lot to owner Brandon Townsley, who opened NBC on Dec. 12, 2020, amid the pandemic. Townsley works a second job in order to keep his business and family afloat.

The brewery was able to survive the shutdowns and emerged to become a popular destination for community members with events including Monday night trivia and its ongoing Boozy Book Club. While it has not been easy, Townsley appreciates the community for supporting the business every step of the way.

“It’s been great,” he said. “We finally got to the point where we have regulars. We’ve also done more events here that have brought in people that probably wouldn’t give us a second look.”

Born and raised in Niles, Townsley has been brewing beer for about 10 years. About six years ago, he started bringing his beer to be judged at the Big Brothers and Big Sisters Bottle Caps and Corks competition in Elkhart. In 2017, his caramel cream ale earned a second-place award for most popular and Townsley started gaining confidence that others would enjoy his beer, he said.

Townsley said he is excited for the new businesses in town and is excited to see what the new outdoor hub will bring to downtown.

“When the NODE was there, we partnered with a yoga studio to do Yoga and Mimosas,” he said. “We’re going to try to do some events out there. We’re going to wait until its set up and ready to go and then I’ll talk to (the Downtown Development Authority) and figure something out so we can utilize the space.”