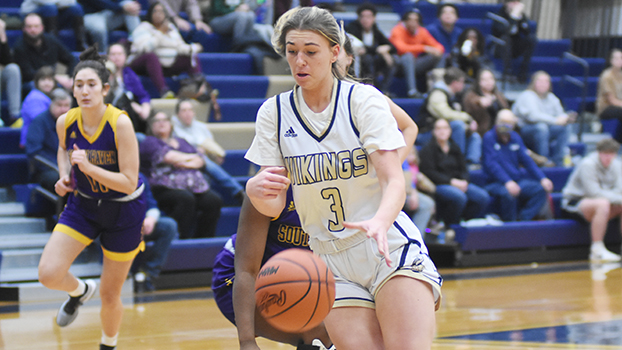 BERRIEN SPRINGS — The Niles girls basketball team may be 0-2 on the young season, but Vikings’ Coach Jessica Johnson likes the improvement her team made between its first two games.

After scoring just 12 points in its season and Wolverine Conference opener against Three Rivers last week, Johnson and her team went to work to improve on all phases of the game. The hard worked paid off as Niles more than doubled its offensive production in a 33-31 non-conference loss to host Berrien Springs Monday night.

Niles also cut their opponents offense in half with improved defense.

“Despite the outcome of last night’s game, I am happy with our overall performance,” Johnson said. “With a roster of majority underclassmen, we went into this season knowing it was going to be tough. We are focusing on improving with each practice, quarter by quarter, and every game. Our upperclassmen are stepping up and showing leadership on and off the court, demonstrating skills that will carry-on after basketball.”

Niles was able to close the gap to 24-22 heading into the final quarter, but with both teams scoring nine points in the last eight minutes, it was unable to overtake Berrien Springs.

Amirah Lee scored 10 points and grabbed 15 rebounds to lead the Vikings, who also got 10 points, eight rebounds and seven steals from Elly Matlock.

Grace Constable led the Shamrocks and all scorers with 16 points.

Niles is back on the court Friday night as it hosts Wolverine Conference foe Otsego.