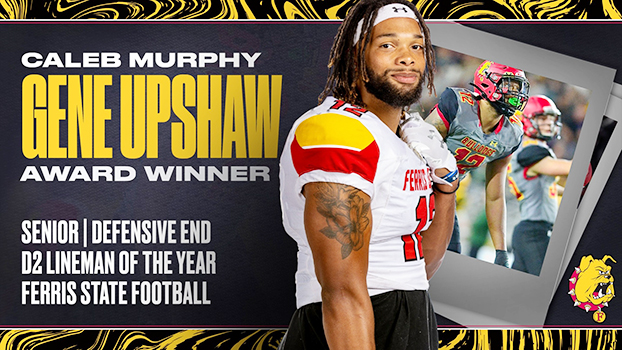 The former Dowagiac standout has already been named first-team All-Great Lakes Intercollegiate Athletic Conference defensive end and the GLIAC Player of the Year.

Murphy, who is also a finalist for the Harlon Hill Award and the Ted Hendricks Award, was named the winner of the Gene Upshaw Award for the Division II Lineman of the Year Award, which was announced Monday.

Murphy is the third consecutive winner of the Upshaw Award, joining Dylan Pasquali (2021) and Austin Edwards (2019).

The award is given annually to the best offensive or defensive lineman in Division II. The award is named after the late Oakland Raiders All-Pro lineman, who was a standout at Texas A&I (now Texas A&M Kingsville). Upshaw, who was elected to the Pro Football Hall of Fame in 1987 in his first year of eligibility, was also the executive director of the National Football League Players Association for 25 years.

The NFL recognizes and supports the award by guaranteeing a spot for the winner in its all-star games.

Murphy will be invited to play in the East-West Shrine Bowl in Las Vegas Feb. 2. He will also be recognized by the Manheim Touchdown Club at its annual banquet.

Murphy set a new NCAA all-time record for sacks this season with 24.5 through the Division II quarterfinals. The defensive end will join his teammates Saturday at home as Ferris State hosts West Florida in the semifinals, which will be carried live on ESPN+.

After helping the Bulldogs win the Division II championship last season, Murphy has raised his game to another level in 2022. Besides the 24.5 sacks, he also had 87 tackles, including 36 for loss and two forced fumbles.