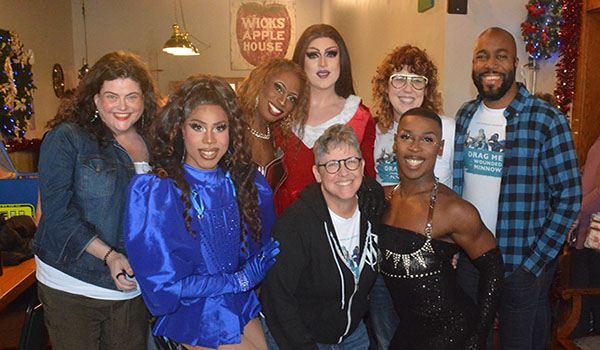 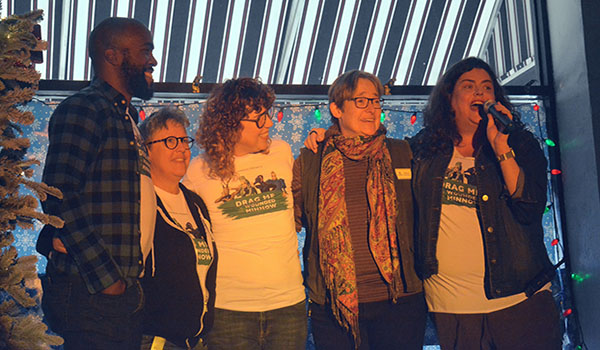 DOWAGIAC — Under sparkling lights, drag queens took center stage in front of a sold-out crowd for a Saturday fundraiser brunch in downtown Dowagiac.

The holiday brunch event for ages 21-and-up featured four of Chicago’s finest drag entertainers — O’laysia, Boy J, Khloé Coulee, and host Kimberly Summer as well as a brunch buffet provided by The Wounded Minnow and custom pastries and cookies from The Baker’s Rhapsody.

The event raised $2,700 for OutCenter of Southwest Michigan, a non-profit whose mission is to provide LGBTQ+ people and their families with the services and support they need to feel safe and comfortable in their communities, while also working with local and state-wide groups to establish respect and understanding of LGBTQ+ people and bring equality home to Southwest Michigan.

Originally scheduled to take place at Oak and Ash BBQ, demand for tickets was so great that the event was moved to The Wounded Minnow to accommodate a larger audience. Kyle Belew, owner of The Wounded Minnow, was happy to offer his business as a space to host the event.

“In a small town, I just think everyone here understands how important it is for everyone to be able to be who they are,” Belew said. “I’m getting pretty old but I think that it’s like everyone’s grandma always says, the world would be a real boring place if we all like the same music, look the same and laugh at the same jokes. Really the more I look into it, it would be boring if we were all really the same. I think it’s great that they did this and I think it’s great that everybody’s here in support of a great cause.”

According to Stay Dowagiac, 75 percent of the attendees were from Dowagiac and surrounding areas. OutCenter Executive Director Mary Jo Schnell attended the event and was overwhelmed with the amount of support from the Dowagiac community.

“It’s amazing to see the folks come out to something like this, in the middle of the day on a Saturday, when they continue doing so many other things that it sends a message to us,” she said. “It’s also going to send the message to the queer kids in our area and it’s so important that they see so many people coming out in support of people just like them.”

Schnell thanked Stay Dowagiac for organizing and Belew for offering his business to host the event.

“To have it in this venue is phenomenal; a long-standing venue in downtown Dowagiac that opened their doors to this event,” she said. Stay Dowagiac Collective, Shannon and Cathy, etc., it’s phenomenal for them to organize this as a way to say ‘hey, we’re here, we’re everywhere. After so much heat out there, it’s so nice to come into towns like Dowagiac and celebrate love. Why not? Okay let’s keep doing it.

“The OutCenter is very grateful for the support but also to be here with Dowagiac at moments like this and of course to let Dowagiac know that we’re here for them too in a very real way.”

The event was put on by the Stay Dowagiac Collective. Comprised of the owners of distinctive short-term rentals 1870 House (Zena Burns and Richard Jackson), The Altus Apartment (Shannon Lyons and Cathy McBride) and The Hatch Street Manor (Desmond Lathan), Stay Dowagiac aims to support the community and bring visibility to the many noteworthy things there are to do in the Dowagiac area.

Following the success of the event, Burns believes Dowagiac will play host to more drag events in the future.

“There’s really a positive ripple effect in the community when everyone sees that these type of events celebrating inclusivity are so popular,” she said. “Ultimately, Dowagiac is an inclusive community, and today proved it.”