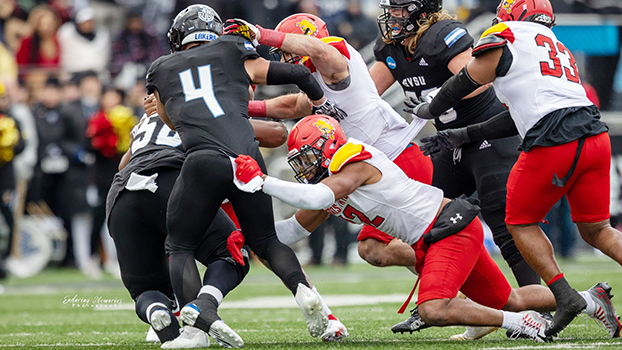 The Bulldogs rallied from a 21-14 deficit, scoring twice in the final six minutes of the game en route to the win. Freshman Eddie Jewett connected on a game-winning field goal with just over a minute remaining and the FSU defense preserved the win as senior Cyntell Williams intercepted a pass on a jump ball situation in the end zone on the game’s final play.

With the win, the Bulldogs moved to 12-1 overall this year.

The Bulldogs, who were making their sixth consecutive NCAA D2 National Quarterfinal appearance, struck early in the opening period as junior tight end Mason Pline blocked a GVSU punt and FSU took over at the 3-yard line. From there, redshirt freshman QB Carson Gulker found the end zone for the first time on the day, giving the Bulldogs a 7-0 lead less than two minutes into the contest.

Top-ranked Grand Valley State responded with a pair of second quarter scores to grab a 14-7 lead. Both touchdown carries came from quarterback Avery Moore with each coming from eight yards out, capping drives of 60 and 65 yards, respectively.

In the third quarter, the Bulldogs took advantage of the short field and drove 37 yards in six plays with quarterback Mylik Mitchell reaching the end zone on an eight-yard carry to knot the game up with 6:58 to go in the frame.

The Lakers reclaimed the lead — 21-14 — with 12:04 remaining in the game, picking off a Mitchell pass to set up a short field. Tailback Tariq Reid scored on a two-yard carry to push the home team in front.

However, the Bulldogs didn’t quick and answered the bell late.

After a good kickoff return by Deion Small to near midfield, Mitchell engineered a 14-play, 53-yard drive that chewed up over six minutes before giving way to Gulker, who tied the game back up with a two-yard scoring run with only 5:48 left.

The FSU defense notched a stop and the Bulldog offense moved 65 yards in seven plays, reaching the one-yard line with just over a minute remaining. On fourth down, Jewett converted the eventual game-winner for the Bulldogs and the defense preserved the win with Williams’ interception in the end zone on the final play.

Grand Valley State totaled 320 yards of offense to 260 for Ferris State overall. The Bulldogs finished with a 142 to 121 rushing advantage in the game, with Mitchell running for a game-high 87 yards on 16 carries. He completed 13-of-27 throws for 118 yards. Ferris State was led in the receiving game by slot receiver CJ Jefferson, who caught three balls for 38 yards.

Meanwhile, Reid led the Lakers on the ground with 78 yards rushing. Cade Peterson competed 15-of-29 passes for 190 yards. Jahdae Walker led the Lakers’ receiving game with four catches for 85 yards.

Ferris State was led defensively by Justin Payoute with 12 stops. Caleb Murphy totaled 10 tackles for the Bulldogs, while Konnor Near finished with nine stops, a sack and three tackles for loss.

The playoff matchup was the Bulldogs’ fourth against GVSU since 2015 and FSU improved to 3-1 all-time in NCAA postseason games against the Lakers with the win. It also avenged a 22-21 regular-season setback in October at home to Grand Valley State. Overall, it was FSU’s 11th win over GVSU in the last 14 matchups under head coach Tony Annese since 2012.

Ferris State is in the midst of its eighth consecutive trip to the NCAA Division II Playoffs and will host a national semifinal game for the third consecutive season Saturday. It will mark FSU’s second-ever meeting versus West Florida following UWF’s 2019 national semifinal win in Big Rapids. The two schools have won the last two national championships with the Argos claiming the crown in 2019 followed by FSU’s 2021 title run.