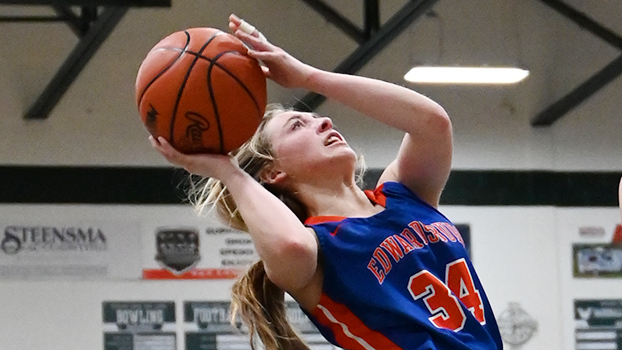 Edwardsburg, which has won five of the last six Wolverine Conference championships, led 12-9 after one quarter, but was unable to maintain its lead, as the Trojans outscored the Eddies 15-8 in the second quarter to take a 24-20 halftime lead.

Edwardsburg (1-1) was led by Abby Bossler and Caitlin Tighe, who both scored 10 points. Averie Markel, who had 25 points in the opener against Lakeshore, was held to seven points by the Trojans.

Edwardsburg is back on the court Wednesday as they host undefeated Buchanan in a non-conference contest slated to begin at 7 p.m.

The host Wildcats jumped out to a 24-1 first quarter lead en route to an easy 68-12 victory over the Vikings.

Dani Glass had 15 points to lead the Wildcats and all scorers. Jennaya Deicker and Gabby Charvat finished with 14 and 13 points, respectively.

Niles is back on the court Monday as it travels to Berrien Springs for a non-conference contest. Tipoff is set for 7 p.m.

Visiting Marcellus squared its record at 1-1 with a 31-18 non-conference victory over Delton-Kellogg Thursday night.

The Wildcats trailed 10-4 after one quarter, but outscored Delton-Kellogg 27-8 the rest of the way to earn the victory.

Marcellus returns to the hardwood Tuesday at it travels to Bangor to open up Southwest 10 Conference play. Tipoff is scheduled for 7:30 p.m.