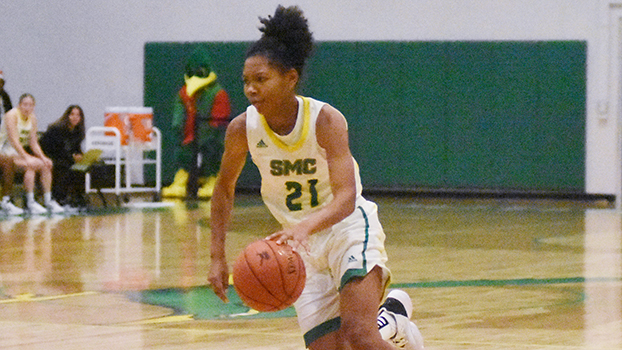 Cameron Thomas scored 22 points as SMC defeated College of DuPage to improve to 5-2 on the season. (Leader file photo)

DOWAGIAC — It was a tale of two games at the 1st Source Bank Fieldhouse Wednesday night.

The Roadrunners outscored visiting DuPage 25-9 in the first quarter as they won back-to-back games for the second time this season.

Laubach scored a game-high 23 points to go along with 10 rebounds, five steals and three assists. Thomas added 22 points. The duo combined to shoot 17-of-26 (65 percent) from the field. They also had all seven of SMC’s 3-pointers between them.

The Roadrunners also got nine points from Ariana Lemons and seven points from Nadia Collins. Lemons tied Laubach for the team lead with 10 rebounds. She also had three steals.

CBG Preparatory jumped out to a 13-3 lead on the Roadrunners, who responded to by outscoring the visitors 31-19 the remainder of the first half to take a 34-32 halftime advantage.

In the final 20 minutes, Southwestern Michigan built a 14-point advantage only to have CBG turn the tables on the Roadrunners and erase that lead over the final 10 minutes, eventually taking the lead and going on to win the game.

The Roadrunners are back in action Saturday as they host Muskegon Community College in a MCCAA non-divisional contest set to tipoff at 3 p.m.