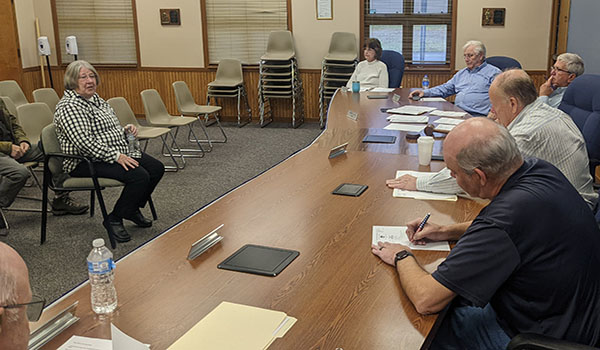 NILES CHARTER TOWNSHIP — Niles Charter Township has a new township supervisor, and she is a familiar face in the community.

Wednesday, after hours of public interviews and deliberation, the NCT Board of Trustees chose Marge Durm-Hiatt to fill the vacant seat left behind by former board president Jim Curran.

Durm-Hiatt was selected over fellow candidates August Kuehn, Mike Armstrong and Dave Spurlock. The interviews, each 20 minutes in length, were conducted starting at 9 a.m. at Niles Township Hall.

“It was a difficult decision,” said Trustee Herschel Hoese. “But I have to say, I feel we did the best for the public that we could have done.”

A township supervisor is responsible for deciding issues of public safety, spending, growth management, zoning, roads and streets, code enforcement, environment and how to budget it. A lifelong resident of the township, Durm-Hiatt served as clerk for 12 years before retiring in 2012. She worked as a trustee for a partial term (1978-80) one full term (1996-2000) and also served as a county commissioner for two years. Her first official board meeting as supervisor will take place at 6 p.m. Monday, Dec. 5.

Treasurer Jim Ringler, who served on the board with Durm-Hiatt during her time as clerk, believes her knowledge and experience will allow her to step in and assume responsibility immediately.

“I think she’s the right person for the job because of her ability to take over,” he said. “Even though it’s a different position, she knows so much about this township and the inner workings of this township that the learning curve for her, as a supervisor will be much shorter than it would be for anybody else, not that the rest of the candidates couldn’t have done it… We’re gonna already be gearing up for another election. She understands elections because she’s been (township clerk). The other side of it is, I think she’s well connected with all the agencies and people and that she’ll be a good attribute to this township.”

Durm-Hiatt cited her commitment to and involvement with the township as a key factor as to why she is suited for the position.

“I kind of missed being out here,” she said. “I’m a team player. I think I have skills of mediating between different departments and people. I’m involved in a lot of other things in the community that I think bring information to the township and to us and I’ve kind of stayed connected with some of the people that I was working with when I was a clerk, as well as other municipalities. I think I have knowledge of what’s going on around us.”

When asked what goals or projects she would like the board to pursue if elected supervisor, Durm-Hiatt said she would like to continue the pursuit of a new township hall and address short-term rentals and voting centers within the township.

Durm-Hiatt believes she has what it takes to lead the township toward continued growth and progress.

“The township is so unique in that we’re the largest population in Berrien County, according to the 2020 Census,” she said. “We have growth here and I think that has to be acknowledged in a proper way. There’s good communication between the planning commission and the board and zoning commissions. I think we’re going in the right direction but we’re so unique in that we’re on a state line and a county line, we totally surround the City of Niles, we have three county commissioners representing that one township, we have three school districts. We were very unique and I just think it’s a challenge for me to kind of help the board continue that work.”