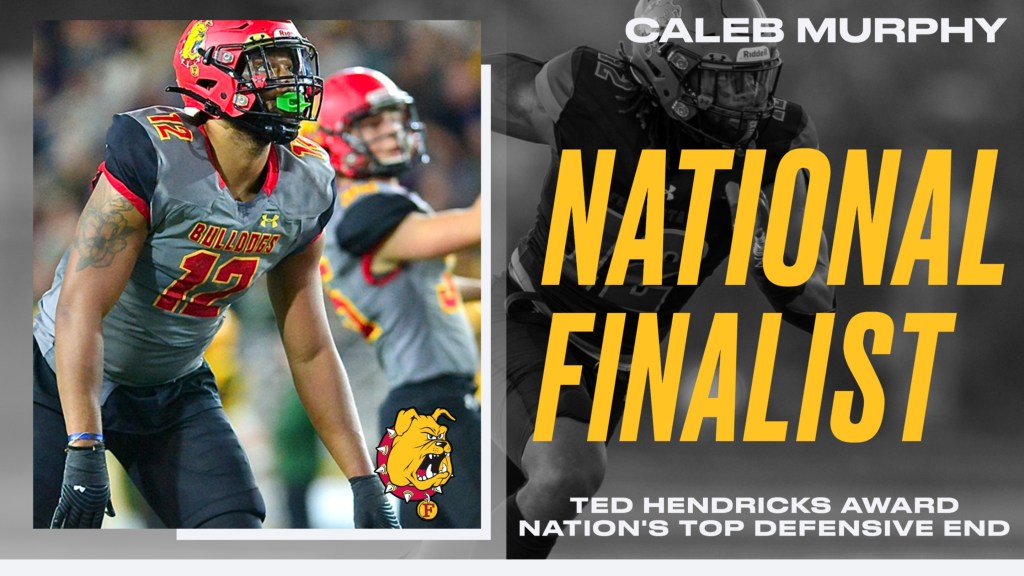 BIG RAPIDS — Standout defensive end Caleb Murphy of Ferris State University has been chosen as a national finalist for the 2022 Ted Hendricks Award, which is presented to the top defensive end in college football.

Murphy, of Dowagiac, is one of only two non-NCAA Division I players on the prestigious list for the annual award as the top defensive end in the country.

Murphy has had a dominant season for the defending NCAA Division II National Champion Bulldogs. He wrapped up the regular-season leading the country in total sacks with 18 (-136 yards) this year along with tackles for loss with 27 (-153 yards). In addition, he forced a pair of fumbles while playing a pivotal role on one of the nation’s top defensive units.

This past week, in the second round of the NCAA Division II Playoffs, Murphy set an all-time NCAA single-season record for sacks as he increased his total to 24.5 this year, which ranks as the most for any player in the history of college football in a single season at the NCAA level. He also broke the school marks for both most sacks and tackles for loss (34.5 TFL to date) in a campaign.

Along with being on the list for the Ted Hendricks Award, Murphy is also a national finalist for the 2022 Gene Upshaw Division II Lineman of the Year honor and is a 2022 Harlon Hill Trophy nominee.

This week, the Bulldogs will square off against archrival Grand Valley State in the national quarterfinal round at Lubbers Stadium in Allendale. Kickoff for Saturday’s Super Region Three Championship game is set for 1 p.m.