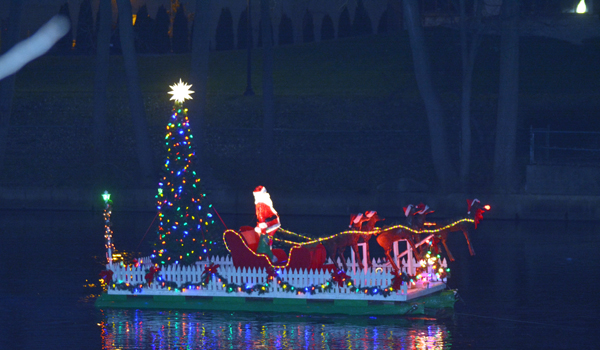 NILES — A local tradition was celebrated with much fanfare Sunday evening.

People from Niles and beyond descended on the Corewell Health Niles Hospital riverside parking lot for the Santa on The River Celebration.

Hosted by the Santa on the River Committee, the event celebrated Mike Peters and Larry Pickles along with their families and local volunteers, who have braved wind, snow, sleet and rain every year since 1962 to launch the familiar festive barge carrying Santa’s sleigh, prancing reindeer and the big man himself for all Niles area residents to enjoy.

The celebration featured hot cocoa, and a photo booth. In addition, the Niles Service League hosted a canned food drive. Mayor Nick Shelton was on hand to present an official Proclamation Letter, signed by the office of Governor Gretchen Whitmer, which recognized the continued efforts of the Peters family, volunteers and community.

Event organizer Judy Truesdell was pleased with the turnout.

“It means so much. It’s every union., and an important one of reunion for all ages. The tradition feeds our souls. It runs deep and it’s just such a happy time. It’s great to see everybody down here. The children running around and getting their pictures taken and all of it. Most of all, it means recognizing the Peters family and to all the volunteers for all the 60 years they’ve been doing this. It feeds my soul that we were able to do this.”

A limited-edition commemorative 60th Anniversary Niles ornament was available for purchase at the event. A special documentary chronicling Santa on the River’s 60th year history is in the works. Niles History Center staff were also on hand to collect stories.

The experience was a memorable one for Caryn Adler, whose family moved to Niles in 1962 when she was four years old.

“That was my first year here that they put him in,” she said. “Every year since then, whenever I drive across the bridge or walk downtown, there’s just some kind of warm feeling seeing the stability of Santa being out every year for 60 years. So many traditions are changing but this is a tradition that it’s just so comforting that it’s not going anywhere.”

As an adult, Adler worked at the hospital and recalls workers and patients alike enjoying seeing Santa on the river during the holiday season.

“I  just appreciate it so much that the people could look out and see Santa every year and just know that they’re not forgotten,” she said.