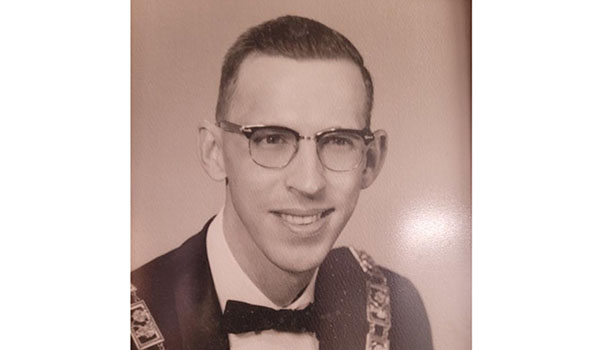 DOWAGIAC — A former Dowagiac mayor is being remembered for the enduring impact he had on the community.

Dr. James Burke passed away Thursday, Nov. 4 at the age of 95 in Spring Hill, Florida. Burke was known as a visionary who helped initiate a series of redevelopment projects that certainly turned the city’s central business district around.

Born and raised in Dowagiac, Burke graduated from Dowagiac Union High School in 1945 and the University of Notre Dame in 1949. Dr. Burke married his wife Barbara in 1952 and the couple was together for 65 years until her passing in 2017.

“He was a great guy,” said city council member Bob Schuur, the city’s longest-serving council member who served under Burke from 1985 to 1997. “He and I got along very well and did great things for the city.”

He also served on the city council for eight years and was a past exalted ruler and an Honorary Life Member of Dowagiac Elks Lodge, and the Dowagiac Rotary Club. In 1997, the city created James E. Burke Park at the intersection of Scruce and Lowe Streets in his name.

“He was very reserved,” said former downtown business owner and DDA member Larry Seurynck. “I hear he had a fiery temper but I never saw it. He was a quiet leader who steered things in the right direction.”

Under Burke’s leadership and with the help of other community leaders such as Fred Mathews, city officials and its Downtown Development Authority initiated the Division Street and Front Street streetscape projects, Farr Park was redeveloped, followed then by the development of Beckwith Park, the Depot Drive streetscape project and the introduction of the DDA’s Facade Incentive Program.

“After the surge and popularity of strip malls in the late-1970s and mid-80s, Dowagiac was no different than most small downtowns,” said Cottage Gallery owner Vickie Phillipson, who was hired by the City and Chamber in the early 1990s when Burke was mayor. “Many of our storefronts were vacant, with buildings left in deteriorating shape. Thankfully, community leaders in the late-1980s took on the task to redevelop our downtown, one project at a time.”

“As a result, the City and property owners rebuilt a viable central business district that could then be marketed to new and growing businesses,” she said. “Today we have a wonderful niche of fine and casual dining, specialty shops and upper-level residential units.”

An owner of multiple downtown buildings during that time, Seurynck remembers life in downtown Dowagiac prior to the streetscape projects.

“Before they started, all of the truck traffic went down Front Street over to Main,” he said. “You can imagine a tanker of gas going down Front Street. It was shaking the buildings and loosen the mortar. One storefront actually fell into the street before they got things squared away. It was quite an era.”

As a member of the DDA, Seurynck was instrumental during that time with the Facade Incentive Program. He appreciates Burke’s foresight and ability to unite both the city council and the DDA.

“In some other towns, there’d be separate visions for the community,” said former DDA member and downtown building owner Larry Seurynck. “The city would have one vision and the DDA another. But because there was unity between the city and DDA, resolutions in Dowagiac passed in 30 days and not 60 or 90 days.”

A Celebration of life Service will be held graveside, on Monday, Nov. 21, 2022, at 11 a.m., at Riverside Cemetery in Dowagiac, with Fr. Arul officiating. Those wishing to leave a message of condolence may do so at www.clarkch.com.