Buchanan falls to No. 5-ranked South Christian in regional final 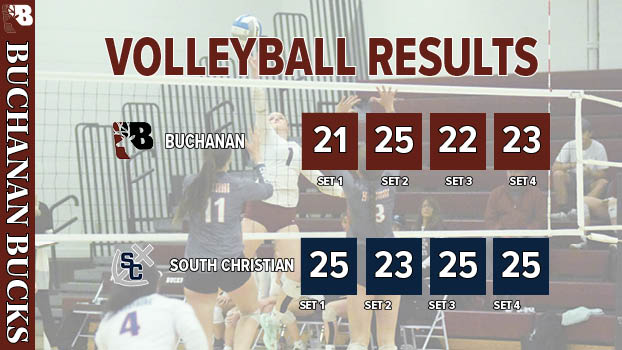 The unranked Bucks gave No. 5-ranked Grand Rapids South Christian all it wanted in falling to the Sailors 3-1. Buchanan and South Christian battled through four tough sets, with both teams holding leads and having to rally back from deficits throughout.

The Bucks jumped out to an 8-4 leads in the opening set, but following a time out by the Sailors, South Christian rallied to eventually tie the first set at 11-1. The two teams continued to battle back and forth before a late Sailors’ run gave them the 25-21 opening-set victory and a 1-0 lead.

South Christian got off to the hot start in the second set, taking a 10-2 lead before the bounce-back Bucks rallied to tie the set at 13-13. The Sailors used another run to make it 20-14, but Buchanan would not go away.

Unlike the first two seats, there were no big swings in momentum in the third set. The Sailors grabbed an early lead, built on it and then held off a late Buchanan charge to win 25-22 and to take a 2-1 lead in the match.

The same was true of what turned out to be the final set. South Christian was able to hold off Buchanan after taking the lead and went on to win 25-23 and to earn a trip to the quarterfinals.