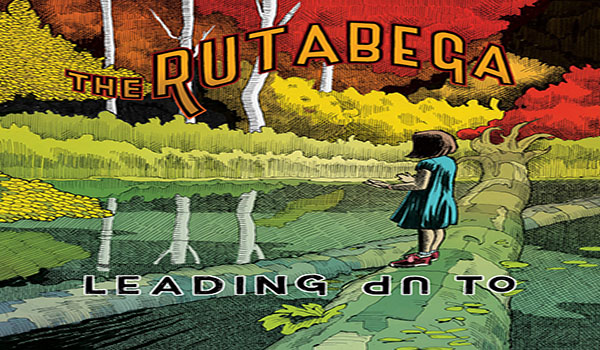 MICHIANA — South Bend’s the Rutabega has returned with their first album in six years, Leading Up To, a beautiful entry to a catalog of music that encompasses sounds both wistful, hopeful, and just plain rock and roll. The newest release rests heavily in music born from the hardest struggles in life and the hope of finding comfort within that dark forest and from the light peeking out at the end of the trail.

The Rutabega has existed in one form or another for over twenty years, beginning as a solo project by Joshua Hensley before going through several evolutions. The current incarnation, including singer & guitarist Hensley and drummer Garth Mason, is the one most familiar to fans. Mason joined in 2011. Josh and Garth came to know each other through the local music scene, coming up in the days of weird dance clubs and all ages punk shows at coffee shops and venues around South Bend and Niles. Though shy about his place there, Josh would take his emotional music out into the scene and came to know Garth, the “punk rock guy who helped local bands record their records for cheap”.

Josh serves as the primary songwriter, creating the initial structure of most songs. Mason, who now lives in Kalamazoo, builds around the ideas sent to him, finding a place for his percussion in the dynamic. Though their sound has remained much the same over the years, the band describes themselves as better dialed in to what they knew their music could be.

“I remember some of the early shows, feeling like I could hear what it could be and not always feeling like we were pulling it off. It was kind of exciting in that way. There was a challenge there, ” explained Josh.

The duo plays without a bass player, allowing them the freedom to carry their sound to a quiet, low place and to bring in a variety of collaborators whenever the need arises, having plenty of friends from the music world sit in both on recordings and at live shows. Much of the music will focus on a particular moment or emotion, stretching an idea, holding on to it, or building on it, carrying the listener away on a wave of feelings.

Josh wrote one of the stand out tracks on the new album, Walkonahead, in 2005 in the final stages of his grandfather’s life. It found its way onto this album after he, on the way to a recording session, stopped by the cemetery where his grandparents are buried. He sat on a lovely day with his guitar and played the song, so it was fresh in his mind as he arrived at the recording space. Garth had also lost a grandparent, just a few months prior to creating the album, so the emotion was strong for both of them.

“It’s really weird when you stop and think that these noises and sounds can transport you,” said Josh.

For the band, music is a powerful form of communication and a source of comfort that can pull someone out of a rough day or help process something heavy. Their hope is to give that experience to listeners. They appreciate those who connect to their art in a busy and often dark world.

“For people to take time out of their life and listen to something you’ve made, it’s an honor,” said Josh.

The Rutabega’s Leading Up To is available now on your streamer of choice or to purchase on Bandcamp in digital format as well as on CD, vinyl, and cassette at theseknottylines.bandcamp.com.