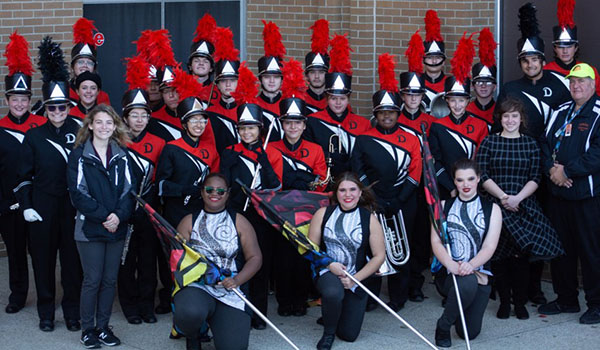 The band, under the direction of Marissa Boynton, hosted its ‘Season In Review’ concert last Wednesday, where the band performed songs from its competition show as well as football game fight songs and tributes.

“I had never experienced anything like ( the Season in Review concert) before,” Boynton said. “I like it, it shows everything we do to the community. It’s nice to be able to lay it all out there for people to see.”

The 2022 marching band show was titled “Music of Queen,” and featured hits from the popular British rock band including “Under Pressure,” “We Are The Champions” and “Don’t Stop Me Now.”

“I think people really enjoyed it,” she said. “I was looking for something people would recognize and something people had a connection to. It hit the mark. For the students, I tried to find music fun and engaging to play. It was a challenge, but I’m happy they pulled it off.”

The marching band season was the first for Boynton, who was hired by Dowagiac Union Schools two weeks after graduating from Michigan State University in December.

“It was good,” she said. It was really busy but I think the experiences were worth the time commitment.”

Boynton’s first year was a successful one, with the band receiving a Division 1 rating at the District 6 Michigan School Band and Orchestra Association Festival, the highest rating a band can receive. The band was awarded an Achievement of Excellence in Marching and Percussion in each of the seven competitions it participated in.

“It was a really good feeling,” Boynton said. “For me, my main goal is making sure students have a rewarding and worthwhile experience. To see their hard work is being recognized, especially after the last couple of years, it’s good to see them feeling good about their success.”

While a student at MSU, Boynton had worked as an assistant marching band director at a Lansing area school. With this year being her first as head of a program and learning on the fly, Boynton felt both welcomed and embraced by the Dowagiac community.

“There is a lot of work that happens behind the scenes that people don’t teach you,” she said. “It was a learning experience. I’m grateful that this was the band I got to experience that with. Our director helped every step. I was doing my best and they were helping me a lot in terms of how Dowagiac does things.”

With marching band season in the rear view, Boynton and her students turn their attention to concert band season.

“We’re in the middle of that right now,” she said. “We’ll review the season and then once we transition to concert band, spend time getting used to being indoors, new seating, music and our routine. It’s almost like starting the first day of school with a different class. The kids are really excited. The energy is high and the mood is good. It’s a lot more relaxing than people might think.”