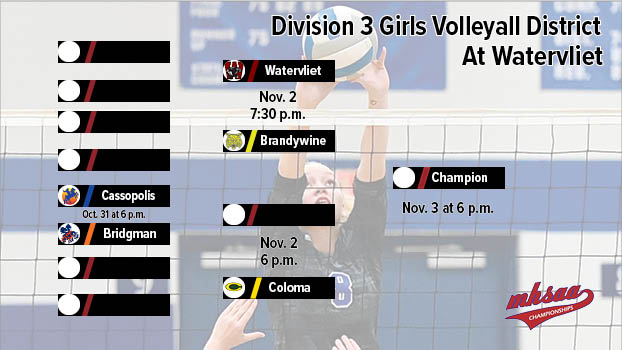 NILES — The regular season has come to an end and conference championships have been awarded.

But none of what happened before this week matters now as the Michigan High School Athletic Association volleyball tournament gets under way.

Watervliet will host the Division 3 District Tournament, which begins Monday.

Cassopolis will kick off the tournament against former BCS Athletic Conference foe Bridgman Monday night. The Rangers and Bees are scheduled to begin play at 6 p.m.

The winner advances to the district semifinal Wednesday against Coloma.

Rangers’ Coach Kaisha Martin was glad to see her team end its Southwest 10 Conference schedule with a win. She is hopeful it prepared her squad for the postseason.

On the flipside, Martin is not particularly happy with the draw Cassopolis had for the districts.

“As far as the draw, I feel like we don’t always get the best pick,” she said. “Every year it is always Bridgman or Brandywine that we have to compete with, so it would be nice to switch things up every year. We are always okay with those two teams because we play them in season, so we know how they operate on the court, but it would be nice for a little change.”

To win the district title, Martin feels her team needs to overcome some issues that plagued it during the regular season.

“To win the championship, I think they just need to trust and believe in themselves,” she said. “This year, we struggled a lot with confidence and it even showed in some games. These girls are very talented and can do so much when they apply themselves, but when we go against high-end teams, we always count ourselves out. We took this week and went back to the drawing board and finally started to get back into the love of the game and realize we need to come at every game guns blazing.”

Cassopolis’ top players are a mix of youth and experience.

“This year, I feel like we have a lot of amazing players that play a role,” Martin said. “I have even put new roles on people because I know they can rise to the occasion. I have Ryli Burks, who is our top player and setter, actually taking on more of a hitter role, I have got Ella Smith and also Atyanna Alford, who are our middle and outside hitters, who also are top picks in the conference, stepping up and helping their team back row and are producing amazing numbers.

“I have Quianna Smith, who is our back row defender, who we decided to move as a right-side hitter. We have our freshman Tori Burks, who is hands down one of the best servers in the conference, and we have our libero Alexis Millirans. We just have so many amazing people that are performing well, and I believe we can take the crown if we leave our hearts out on the court.”

Brandywine, which received a first-round bye, opens up the tournament against defending district champion Watervliet, which is ranked No. 5 in the Michigan Interscholastic Volleyball Coaches Association Division 3 poll, at 7:30 p.m. Wednesday. The winner advances to Thursday’s championship match.

“Our draw definitely has some pros and cons,” Zablocki-Kohler said. “A bye in the first round is always nice. Meeting Watervliet in the second round is definitely going to push us to play our absolute best every minute of the entire match, but that’s what the postseason is all about. Bringing your absolute best to the table with the knowledge it’s a win to play another day or lose and your season is over.”

Zablocki-Kohler says to win the title, the Bobcats will have to dig down deep.

“To win the championship, we need to have each of our girls bring their hearts and heads to play and give their all every play of every set,” she said.