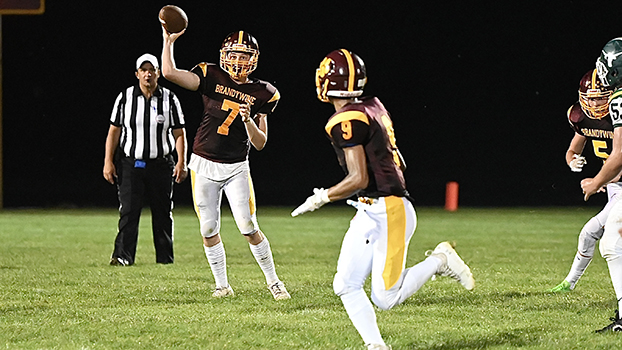 Neither team found the end zone in the first quarter of the regular-season finale, but three Panther touchdowns in the second quarter proved to be the difference.

Aaron Jasiak tossed a pair of touchdown passes for the Panthers, who improved to 5-4. He connected with Blake Smith on a 28-yard scoring toss and Will Kovl for a 65-yard bomb, which ended the first-half scoring.

Sandwiched in between the two passes was a 27-yard PJ Nelson run and the Bobcats’ lone first-half touchdown, a 1-yard Owen Hulett run.

Jasiak added a rushing touchdown to his night in the third quarter as Parchment extended its lead to 28-6.

Michael Palmer caught a 28-yard touchdown pass from Hulett to complete the scoring for Brandywine, which ended the regular season with a 4-5 record.

The Panthers finished the night with 293 yards of total offense, including 197 on the ground. Brandywine had 212 total yards, of which, 145 came passing as Hulett ended the night 7-of-19 with the touchdown. He also ran for a team-high 48 yards on 19 carries.

Palmer caught three of those passes for 107 yards and the score.

Carter Sobecki led the defense with 12 tackles, while Brock Dye and Gavin Schoff both had seven stops.

Brandywine, which was also 4-5 last season, will now wait for the announcement of it Division 7 first-round playoff opponent when the Michigan High School Athletic Association announces its postseason pairing Sunday at 6 p.m. Sunday on Bally Sports Detroit.