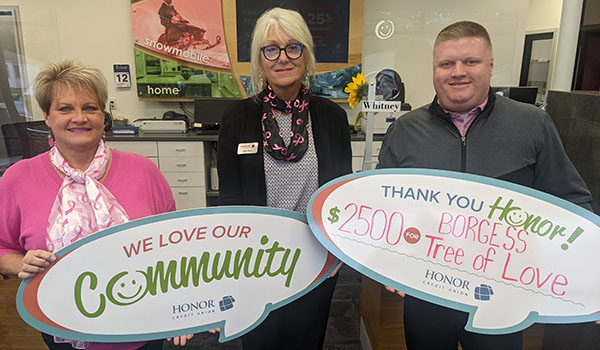 Honor Credit Union of Dowagiac, 56337 M-51 S., donated $2,500 to the Ascension Borgess-Lee Foundation on Wednesday, Oct. 12 to kick off a fundraising effort for the Tree of Love campaign, which since 2011 has provided mammograms and other breast cancer services for uninsured and underinsured people in Southwest Michigan.

“This is always a very special time of the year for me, as my family has been personally touched by cancer, just as so many other families I know have too,” Reifenberg said. “Cancer has become far too common of a word, and anything we can do to help the cause is vital. It’s important to reflect and give back to our communities, and this is just one of our core values at Honor Credit Union, after all it’s just as simple as people helping people.  I look forward to being a part of such a great cause in alignment with Ascension Borgess Lee Hospital for the Tree of Love campaign every year.

“This year we are proud to be a supporting partner with a donation of $2500 on behalf of Honor Credit Union. Being real and being local in our communities is what we are all about here at Honor.  This campaign is a great way to provide free mammograms for the people of Dowagiac and our surrounding communities.  As I have said so many times before, I personally am thankful that we have such an amazing hospital doing so many great things right here in the community of Dowagiac.”

To date, the campaign has raised more than $142,000 for uninsured and underinsured people in Cass County.

Truitt thanked Reifenberg, Linda Tyria and the Dowagiac Honor Credit Union team for the donation and dedication to the campaign.

“Not only are they boots on the ground as far as getting donations for us, what (having a partner like HCU) really does is it increases the donor base,” he said. “We’ve seen the donation base expand exponentially since they started accepting donations here at the branch. Hopefully if people are donating then they’re also learning about what the Tree of Love is and can hopefully share that with people in their lives who may be affected.”

The fundraiser kickoff ceremony took place Friday when Dowagiac football hosted Cassopolis in the eight annual Pink-Out Game. Since 2015, the Ascension Borgess-Lee Foundation has partnered with the Dowagiac Athletic Department and the varsity football team to host the game, with HCU being a major sponsor of the game since the beginning.

Truitt thanked Dowagiac Athletic Director Brent Nate and head football coach Duane Davis for their partnership with the Pink Out Game. Every year, in addition to the other funds raised during the evening, the Athletic Department donates a portion of the proceeds from the ticket sales towards the Tree of Love.

Donations to the Tree of Love can be made in person at the Dowagiac Honor Credit Union starting Monday October 17th. Each $5 donation at HCU receives reusable handwarmers and each $8 donation at HCU receives a pair of pink gloves, with a $10 netting both the handwarmers and gloves. Overall, each $8 donation designates one light on the Tree of Love, which will be lit in a ceremony at 5:30 p.m. Wednesday, Nov. 30 in Farr Park next to the hospital. An $80 donation will sponsor a mammogram for a woman and honor or remember up to 10 people.