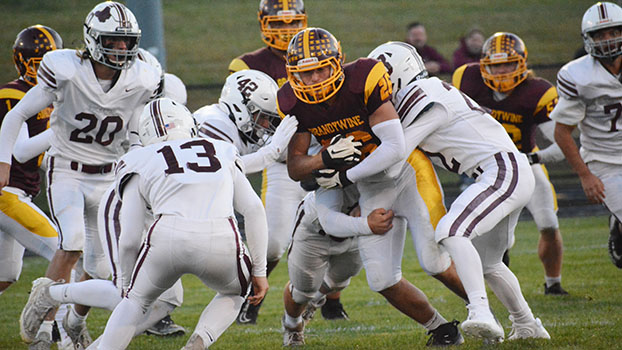 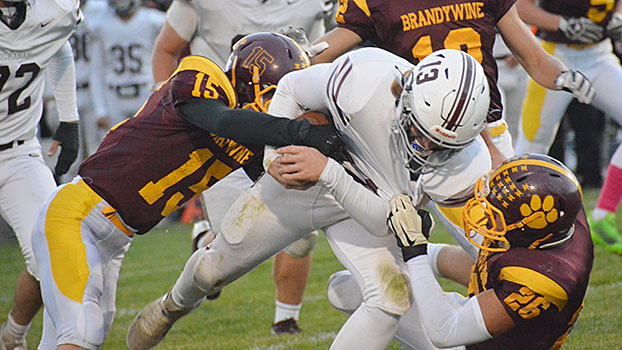 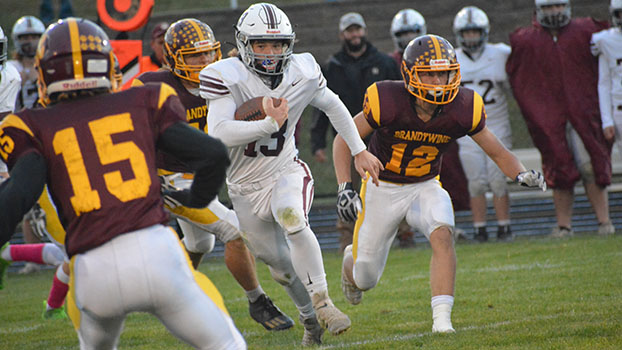 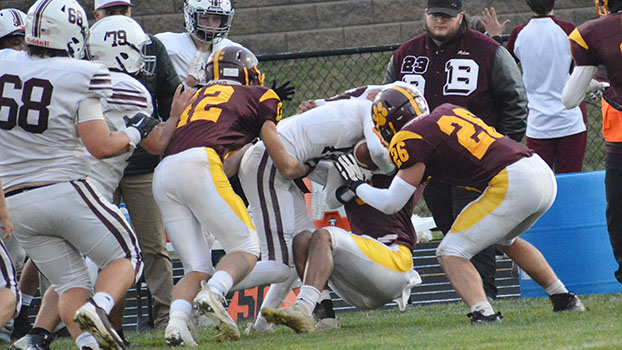 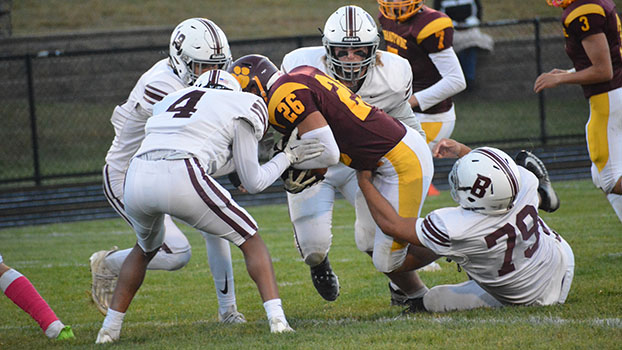 NILES — Rivalry games are like a box of chocolates. You never know what you’re going to get. Will you experience the sweet taste of victory or a bitter defeat?

When the going got tough, visiting Buchanan withstood a second-half Brandywine rally and escaped with a 26-24 win over its bitter rivals to clinch at least a share of the Lakeland Conference title Friday night.

“Heck of a game,” said Buchanan coach Mark Frey. “We came out real strong, feeling good and kind of went flat. They got a quick safety on some of our errors and we couldn’t get our wit back. They made some great plays, and luckily on that 2-point conversion, we stepped up and stopped them and then our offense geared up to run out the clock, so it was a fun night.”

The Buchanan win avenges last season’s 12-6 loss as the Bucks move to 36-27 all-time against Brandywine.

Trailing 20-0 at halftime, Brandywine outscored the Bucks 24-6 in the second half and trimmed the deficit to 26-24 following a 9-yard touchdown run by quarterback Kevin Roberts. After stopping the 2-point conversion attempt that would have tied the game, the Buchanan offense paved the way for enough first-down conversions to milk the last 6:21 of the game off the clock.

A Nico Finn first down with roughly one minute remaining sealed the win.

“(Finn) played great,” Frey said. “He’s a hard runner, a hard nose linebacker for us. He leads us there in all phases, so we’re really excited about him. I’m glad he’s a junior, he came up big when we needed him.”

Buchanan quarterback Connor Legeault completed 5-of-10 passes for 58 yards and an interception and carried the ball 16 times for 45 yards. Leland Payne had 15 carries for 115 yards and a touchdown, while Finn added 81 yards and a touchdown run on 12 carries as well as four tackles and one sack on defense.

Kyle Lewis-Schadler had one carry for two yards and a touchdown, while Thomas VanOverberghe tallied three catches for 39 yards.

It was a tale of two halves for Brandywine. After failing to put up points in the first half, the Bobcats special teams took advantage of back-to-back sacks by the defense to force a safety just over a minute into the second half. A few minutes later, Michael Palmer found the end zone on an 8-yard run. The 2-point conversion made it a 20-10 ball game.

Buchanan responded with a Finn 10-yard touchdown run with 10:22 remaining before Roberts orchestrated two touchdown drives to pull within two.

“This defense, this team, is designed to be in dog fights,” said Brandywine Coach Justin Kinzie. “I kept telling the guys it isn’t like Buchanan packed it in. They were playing their butts off. It’s not like they were just trying to eat clock and survive, they were trying to beat us and send a message, so the fact that our guys came out and played so tough speaks to what we’re capable of.”

After the defense stopped Brandywine’s 2-point conversion, Frey had one thing to say to the offense before they took the field to ice the game.

“This is it, you’re gonna lose it,” Frey said. “This was for sure the conference title. So we were pretty excited about that, but it could have been taken. We left our hand wide open for the grab.”

Kinzie was impressed with what he saw from Roberts, whose presence ignited the Bobcats on both sides of the ball.

“We got our starting quarterback back tonight, which was phenomenal,” he said. “It’s just awesome to see the way the team came together. I wish we would have played a full 48 minutes. We really shot ourselves in the foot in the first half. It is what it is. We’re gonna learn from it. I think that we’ve seen what we’re capable of when we’re doing what we’re supposed to be doing.”

“It comes down to the fact that we got to put together a full 48 minutes,” Kinzie said. “If we can put a full 48 together, we’re really dangerous. It’s exciting to see the future, but this one stings a little bit.”

As for Buchanan, the Bucks look to clinch an outright conference championship against Benton Harbor (4-3, 2-1).

“It’s always been a battle,” Frey said. “What a night with the Bobcats; they’re a great team. We’re looking to use this to springboard into the next week and try to solidify that conference title if we can and then finish this season strong for a playoff run.”