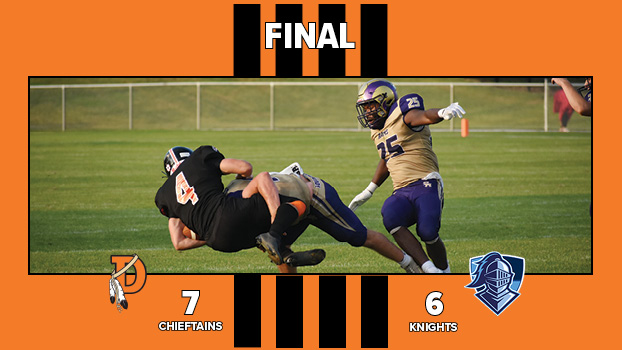 The losing streak dated back to playoff loss to South Haven in 2020. This was the first meeting between the two schools since 2004 when the Chieftains defeated the Knights 27-6.

Lamone Moore scored on a 1-yard run in the second quarter in what turned out to be the game-winning touchdown. Dowagiac (1-5) kicked the extra point to lead 7-0 at halftime.

The Knights (1-5) scored in the fourth quarter on a 1-yard run, but failed on the conversion attempt.

Avery Amundsen led the Chieftains with 89 yards rushing on 13 carries, while Isiah Hill was 5-of-6 passing for 66 yards. Arturo Benitez had four catches for 54 yards.

Amundsen also led Dowagiac defensively with 11 tackles. Christian Wheaton had four tackles and an interception, while Max Stelmasiak added five backs and a pair of sacks.

The Chieftains will try to make it two straight this week when it takes on Benton Harbor, which was a 14-0 winner over Brandywine Friday night.

A 58-point first half allowed host Centreville to keep Cassopolis winless on the season Friday night.

Centreville outgained Cassopolis 490-61 despite the Rangers running 41 plays compared to 24 for the Bulldogs.

Anthony Higgins led the Rangers with 21 yards rushing on 10 carries.

The Rangers are back in Southwest 10 Conference action Friday night as they face White Pigeon.