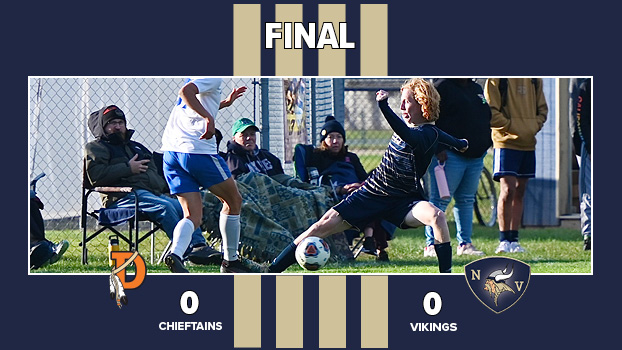 NILES — The Niles Vikings and Dowagiac Chieftains clawed their way to a 0-0 tie in non-conference soccer Thursday night.

If not for the outstanding goalkeeping display put on my Chieftain keeper Travis Rehborg, host Niles would have led midway through the first half. His triple-save in the 32nd minute from different angles helped keep Dowagiac in the game when it seemed like things just weren’t going their way.

“He [Travis] has come on really strong this year,” said Dowagiac Coach Joey Pasternak. “This is his first year playing keeper and has continued to put in the work in every single day. He kept us in multiple games so far this season just like today.”

Both teams had a couple of opportunities at goal in the first half, but most of the match was played in the middle third of the field as, neither team was able to string together solid possession long enough to create good scoring chances.

“With our formation, we have to control the midfield,” said Niles Coach Scott Riggenbach. “Unfortunately, it can turn into kick ball once players get tired.”

When the Vikings did have possession though, their offense continued to flow through senior captain Andrews Ntsiful. His vision allowed for through balls to penetrate the Chieftains’ defense, but nothing would be able to come of it.

Most of the Vikings 16 shots came with 10 minutes to play in the game, but Rehborg could not be beat.

“We have been focusing on finishing this year,” Riggenbach said. “That was just how tonight went. I told our guys that tonight was going to won by a single goal. And I thought that we have had this one.”

The Chieftains needed just a couple of extra seconds at the end of the game to squeak out a win, but the clock read 00:00 just as Allex Hernandez was able to get off a shot that ended up beating Niles keeper Antwone Whitelow.

Looking ahead, Dowagiac traveled to Paw Paw High School Saturday for a date with the Red Wolves.

“I’m looking forward to us playing our game,” Pasternak said “I think we are a very good team and hard to beat when that happens.”