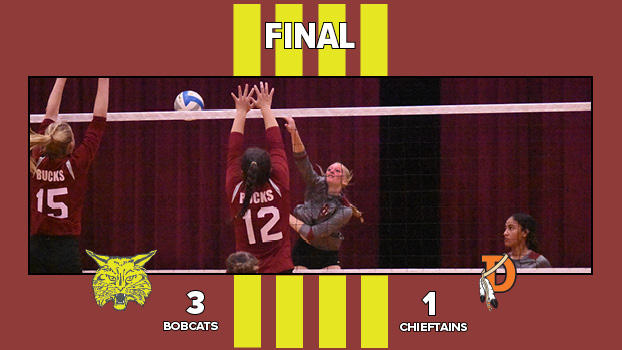 DOWAGIAC — Visiting Brandywine rebounded from its loss to Buchanan with a 3-1 Lakeland Conference victory over Dowagiac Thursday night.

The win kept the Bobcats a game back of the Bucks in the league standings as Buchanan swept Berrien Springs Thursday night.

First-year Dowagiac Coach Amber Todd was pleased with the way her team fought against the Bobcats.

“Tonight we lost to a great Brandywine team,” she said. “At times, we pushed ahead, but then we did not maintain the lead to finish the sets. The girls did a great job bringing energy and playing hard.”

Kadence Brumitt had a big night at the net with 22 kills and three blocks. Kallie Solloway finished with four blocks and Tressa Hullinger three. Hullinger also had a team-high eight blocks.

Dowagiac was led by Caleigh Wimberley and Maggie Weller at the net with 14 and 12 kills, respectively. Wimberley also had three aces and 12 digs. Weller finishe with seven digs, two blocks and an assist.

Brooklyn Smith led the team with 35 assists to go along with three aces. Abbey Dobberstein finished with six kills and 1 digs.

The sweep improved the Bucks to 18-3 overall and 3-0 in conference play.

The Eddies remained tied for first place in the Wolverine Conference following their sweep of host Paw Paw Thursday.

On Saturday, the Eddies went 2-1 at the Battle Creek Pennfield Quad.

Glaser had 21 kills, 13 digs and two blocks. Shier had 19 kills, two blocks and two digs, while Pippin had 19 kllls and a pair of digs.