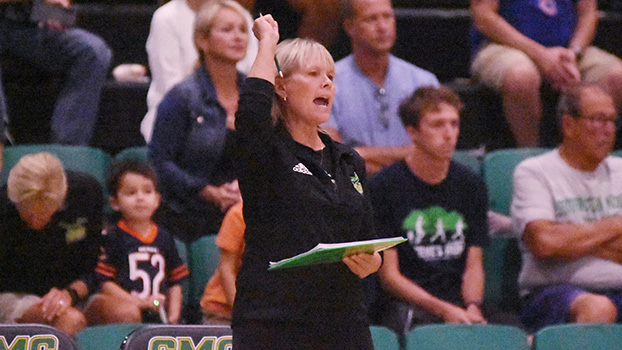 SMC Coach Jenny Nate was pleased with how her team played in its second meeting with Muskegon Community College this season. (Leader file photo)

DOWAGIAC — The Southwestern Michigan College volleyball team got a chance to measure its progress when it hosted Muskegon Community College at the 1st Source Bank Fieldhouse Friday night.

“Despite a three-set loss, I am thrilled with how we played tonight,” said SMC Coach Jenny Nate. “The progress we have made in a month is incredible, especially when we truly play at the level I know we are capable of playing at. Tonight was our best overall performance this season. If we can just hold on to the aggressive offensive and defensive energy, grit, focus, and determination, we exhibited tonight the wins will come; I’m beyond excited for the future of this team.”

The loss dropped the Roadrunners to 8-5 overall. Muskegon improved to 14-4.