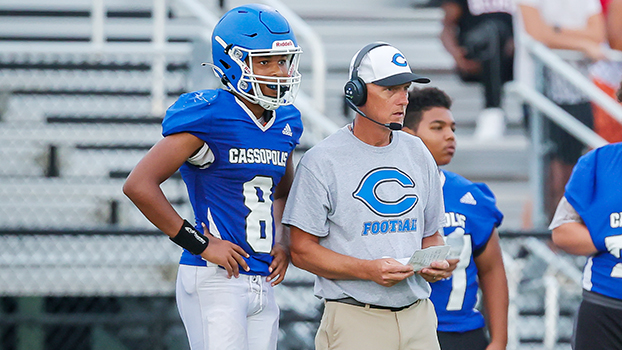 CASSOPOLIS — Host Cassopolis is still in search of its first win of the 2022 season after Decatur defeated the Rangers 49-6 in a Southwest 10 Conference game on homecoming night at William F. Scott Field.

Cameron Cropsey scored three touchdowns for the Raiders, while Brenden Hunsberger had a rushing and receiving touchdown. Danny Camarillo and Nick Mroczek also scored for Decatur.

Cassopolis’ only touchdown came in the second quarter when Jayden Brown scored on a 24-yard run. The conversion attempt failed.

Decatur outgained the Rangers 357-129 in total yards, with 219 of those yards coming on the ground. Cassopolis had 93 yards rushing and 36 yards passing.

Brown led the way with 31 yards on nine carries. He was 4-of-12 for 36 yards and a pair of interceptions.

“Kids are playing hard, and to the best of their ability,” said Cassopolis Coach Steve Green.

“Coaches are very pleased with the effort. We just need to be more physical across the board.”

The Rangers hit the road Friday night as they travel to Centreville for another Southwest 10 Conference contest.