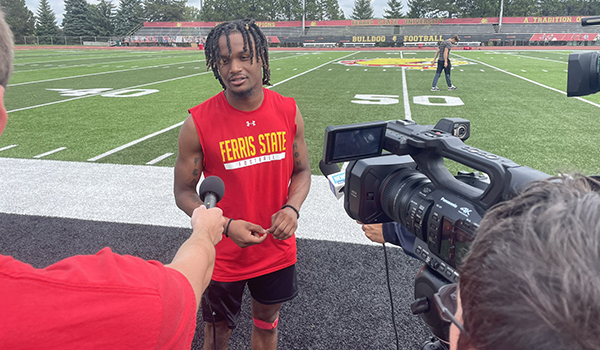 BIG RAPIDS — The No.1-ranked Ferris State football team is 2-0 on the season and sophomore wide receiver Tyrese Hunt-Thompson is a key reason why.

The former Cassopolis standout has caught seven passes for 112 yards, including a six-catches, 97-yards performance in the season opener against Central Washington.

Hunt-Thompson spoke to the media Wednesday after practice ahead of Saturday’s homecoming matchup against Waldorf:

Tyrese, 2-0 to start the season coming off a national championship last year. Can you just talk about what it means to come into the Homecoming game with those two things behind you?

Tyrese: “It feels good to come out here in front of our home crowd knowing we brought a championship back. We feed off them and they feed off us, so it’s a good feeling.”

With this extra week of rest, what have you guys been focusing on in terms of preparation coming into this game against Waldorf?

Tyrese: “Getting players that aren’t healthy, healthy. That’s basically it; making sure our bodies feel good. This week, we’re just preparing for them like we usually do for game week.”

Tyrese, in that first game you were the team’s leading receiver. Can you just talk a little bit about your performance and how you feel you’ve done out there?
Tyrese: “I feel like I’ve done alright. I’m kind of hard on myself, I’ve got things I could do better. We’ll see how the season goes but I think I can do better.”

How has it been going with you working along with (quarterback Evan Cummins) and the other QBs? Mylik (Mitchell) is not there, but how is that camaraderie going as you, the receivers and Cummins get ready for this game?

Tyrese: “It’s going good. We get reps from a lot of QBs every practice. They get the same amount of plays every practice so it’s nothing new to us. We trust and believe in every QB that we have.”

What’s it going to be going up against this Waldorf team? They’ve been a little spotty on defense but that’s a good opportunity for you guys to make big plays.

Tyrese: “It’s a good opportunity for us. They have to adapt to our offense. That’s for every team so that’s how we’re going about it this week, too.”