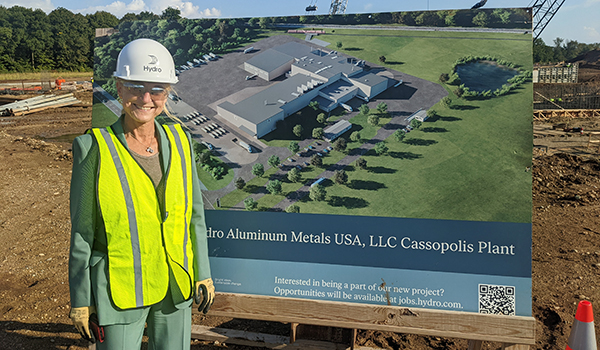 A native of Norway, Guddal grew up in a small village similar to Cassopolis. That village happened to be home to a Hydro plant.

Now, years later, Guddal will be returning to a new-yet-familiar village lifestyle as the Operational Director for Hydro’s new aluminum recycling plant in Cassopolis.

“I really know the value of growing up in a small village,” she said. “I also really know the value of having Hydro as a neighbor in a small village because where I grew up, there was a Hydro plant close to my home that has also been an opportunity for the young people in the village to get to work and develop in Hydro and that is also my expectation.”

Guddal arrived in Cassopolis Tuesday to tour the plant and Cassopolis. Once completed, the facility would mark the first large-scale production of Hydro CIRCAL extrusion ingot aluminum in North America, creating 70 jobs. According to the company, Hydro CIRCAL is its brand of premium recycled aluminum made with a minimum of 75 percent recycled, post-consumer aluminum scrap.

Guddal will relocate to Cassopolis spring 2023 and said she has already begun the recruitment process.

Guddal started her career in Hydro in 1993 as a trainee and has extensive experience from several different management roles. She headed the local start-up team in Azuqueca, Spain, where she was later appointed Plant Manager. Other previous leadership experience in Hydro includes Casthouse Manager at Søral (today Hydro Husnes),HR Business Partner and other management positions at Hydro Husnes.

Since 2018, she has been Plant Manager at Hydro Karmøy. The industrial-scale pilot plant is operating with around 15 percent lower energy consumption than the world average, and has the most climate and energy-efficient aluminum production technology in the world.

Her experience outside of Hydro include Chief Municipal Executive in Odda Municipality and Advisor for business clusters in Innovation Norway. She also has experience as a board member for several industrial companies.

“It has been a great adventure,” she said. “(Hydro) has given me the opportunity to grow and the opportunity to work in different locations around the world. “I have a lot of experience when it comes to starting up new plants; that’s a great team effort. It’s so exciting to establish a new team and start the new plant together. I’m so happy to be here today.”

Guddal has a master’s degree in Process Engineering from Technische Universität Berlin, Germany and an Executive MBA in Strategic Management from the Norwegian School of Management.

While the safety of her team will be her first priority as supervisor, fostering a healthy work culture is just as important for Guddal.

“If you are able to put safety first, you will also have the culture that you need to provide a high quality product,” she said. “This will be my focus to establish the organization and have the people feel like one team, and to provide a great working environment for the people to enable us to provide or to deliver on our targets.”

Guddal added that she looks forward to Hydro engaging the community.

“That’s why I think it’s so exciting to build a plant in Cassopolis,” she said. “We want to be a part of Cassopolis and we have a long-term perspective for our plant here. I really look forward to the cooperation with the village and the people here and getting to know the people better.”