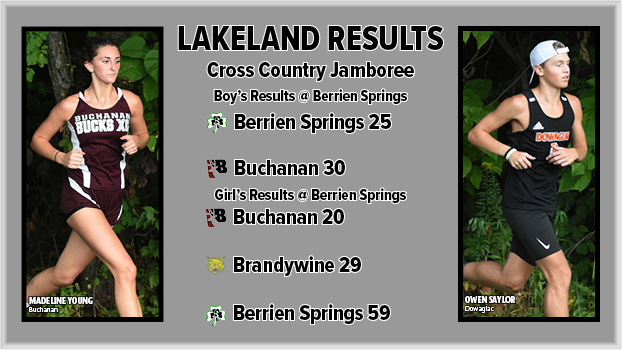 The Shamrocks scored 25 points to beat Buchanan, which finished with 30 points. Dowagiac and Brandywine did not have enough runners to field a team score.

The Bucks took first-place in the girl’s race by finishing with 20 points. Brandywine was second with 49 and Berrien Springs third with 59. Dowagiac did not have enough runners to post a team score.

Berrien Springs’ Luke Morrison was the individual winner in the boy’s race with a time of 17:00.

The Chieftains’ Owen Saylor was the runner-up with a time of 17:30, while Buchanan’s top finisher was Jack Sherwood with a time of 18:17. Robert Hartz finished 11th to lead the Bobcats with his time of 20:16.

Miley Young led Brandywine with a third-place finish and a time of 23:24. Jocelyn Kiner led Dowagiac as she finished 19th with a time of 27:42.

The Bulldogs scored 20 points to beat Three Rivers (53) and Edwardsburg (59) in the boy’s portion of the jamboree, while Otsego swept the top five spots to beat Edwardsburg 15-47 in the girl’s race.

Niles’ Aiden Krueger was the runner-up in the boy’s race with a time of 17:14. Mary Saylor placed seventh with her time of 22:08 in the girl’s race.