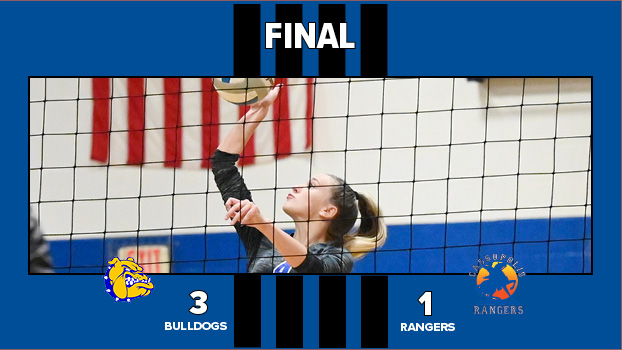 CASSOPOLIS — Host Cassopolis was able to get off to a quick start against Centreville, but it was the Bulldogs who came away winners in Southwest 10 Conference volleyball Tuesday night.

The Rangers won the opening set 28-26. The Bulldogs, who are an honorable mention pick in Division for of the Michigan Interscholastic Volleyball Coaches Association polls, won the final three sets 25-19, 25-16 and 25-15 to earn the 3-1 victory.

“This game was extremely intense,” said Cassopolis Coach Kaisha Martin. “We came into the game with the mindset that we needed to be very aggressive against Centerville. We knew if we did making a play with the ball that they were going to make one on us so we really focused on attacking the ball. This game we really believe we beat ourselves due to our own errors.

“One issue we are working on is making sure we have the same energy and intensity from start to finish. We tend to play the first game with very high energy and then most times we tend to lose that fire that we had but we are taking it as a learning experience as going back to the drawing board for our tournament Saturday.”

Rylie Burks had a team-high 13 kills and 17 assists, to go along with five digs and a pair of aces, while Alexis Millirans led Cassopolis with 25 digs. Katherine Gregory had a team-high four blocks.