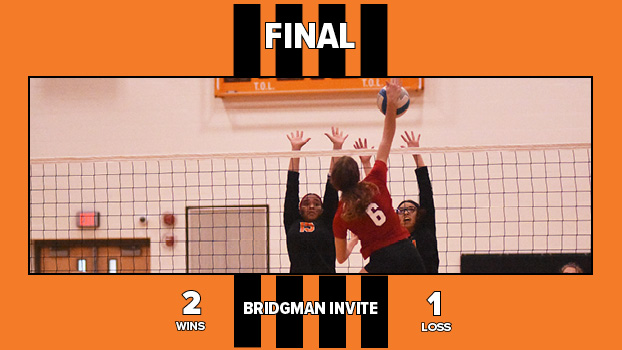 “Tonight, the girls played hard and ran a better offensive game,” said Dowagiac Coach Amber Todd. “Caleigh Wimberley stepped it up and became that go-to hitter we were looking for. She did a great job putting the ball away. Brooklyn Smith did a great job mixing up our offense and feeding the ball to different hitters.”

Todd said her team lacked energy in going 1-2 at Portage Central on Saturday. That was not the case Monday night.

“We lost a tough three-set match against a great Bridgman team,” she said. “The girls fought hard and played well tonight. I am proud of the progress we are making and we will continue to improve our play.”

Wimberley had 21 kills, 23 digs and seven aces for the Chieftains, while Abbey Dobberstein finished with 15 kills and 26 digs. Maggie Weller finished with 17 kills, six aces, 14 digs and a pair of blocks.

Alanah Smith contributed 10 kills and a pair of blocks. Brooklyn Smith had 57 assists.

Dowagiac (11-7-2) will travel to Benton Harbor for a Lakeland Conference match with the Tigers Thursday.

The Bobcats improved to 12-3-2 with a sweep of host Our Lady of the Lake Monday night.