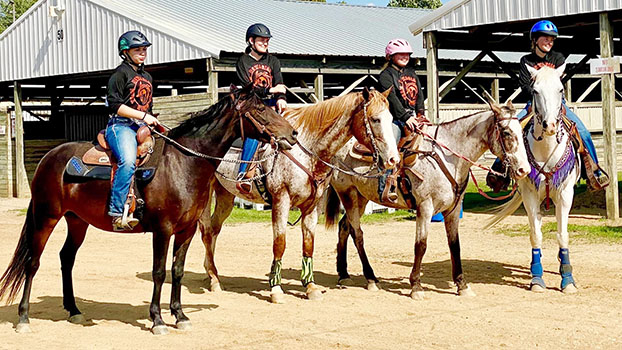 The Dowagiac Equestrian Team returns to the regionals after a three-year absence. (Submitted photo)

BERRIEN SPRINGS — After a three-year absence, the Dowagiac Equestrian Team has advanced to the Michigan Interscholastic Horsemanship Association regionals.

Dowagiac took part in the district competition at the Berrien County Fairgrounds.

Competing for Dowagiac were senior Trinity Bloomer, sophomores Cassidy Green and Marissa Cross, along with freshman Grace McCarthy. Sophomore Olivia Weber was unable to compete due to injury.

Bloomer had 36 points on Saturday, but only six points on Sunday as she had to withdraw due to an injury to her horse.

Cassidy pushed out of her comfort zone to compete in Saddle Seat classes in addition to Western, Hunt Seat and Gymkhana, riding in 14 out of the 17 classes on Saturday,” said Dowagiac Coach Judy Stilwell.

Green earned a first-place position in Reining and another first in the 2-man relay with McCarthy. McCarthy, who is the youngest rider on the team, also pushed into new classes riding in Hunt Seat, Western and Gymkhana. McCarthy was a part of the first-place, 2-man relay on Sunday with Green, and on Saturday, she earned a second-place in the 2-man with Cross.

Cross also competed in Western, Hunt Seat and Gymkhana classes, riding two different horses. Besides being a part of the second-place, 2-man team on Saturday, Marissa earned a second-place in the Flag Race on Saturday. Bloomer had to pull from her classes Sunday due to a horse injury, but was able to add points to the board before the injury, and the team is hoping she is able to return to competition before regionals.

Regional competition with 17 double-judged classes will be Friday night, Sept. 30 through Sunday, Oct. 2, at the Berrien County Fairgrounds.

Teams from Districts 3, 5, 16 and 19 will compete for a chance to advance to state competition in Midland.