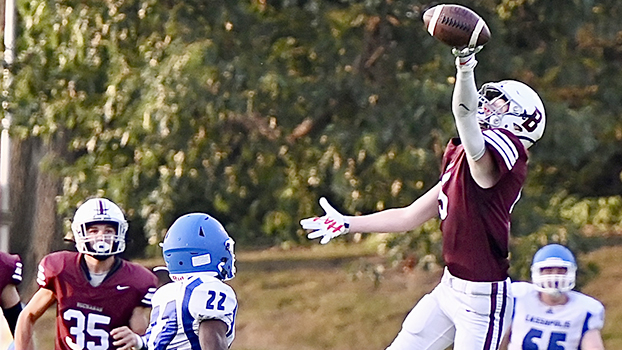 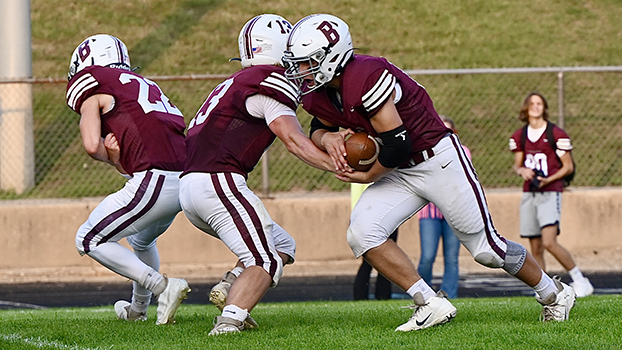 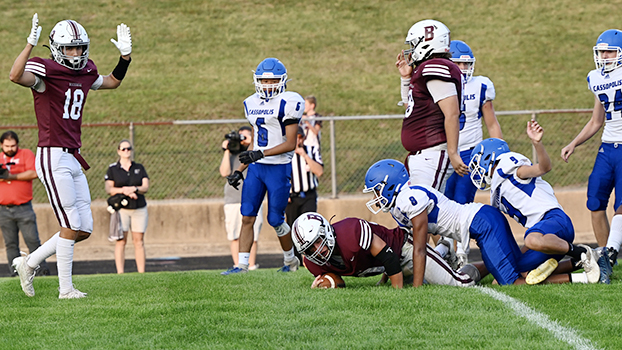 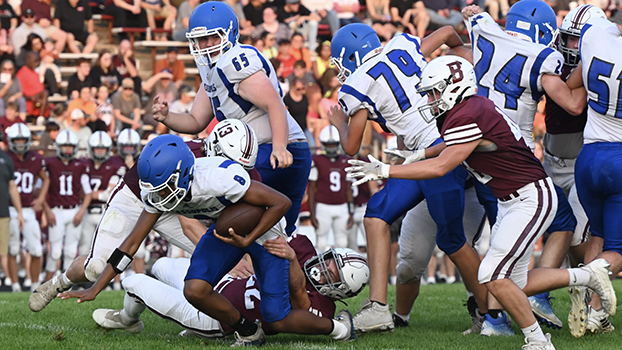 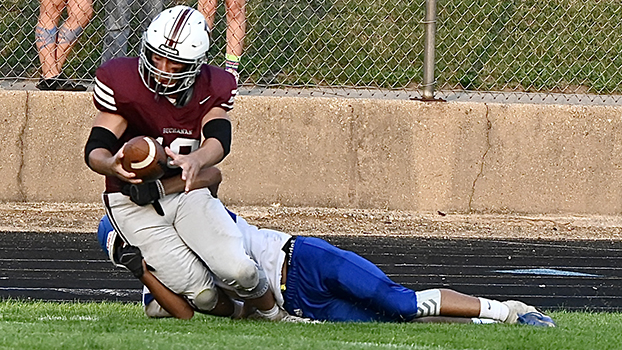 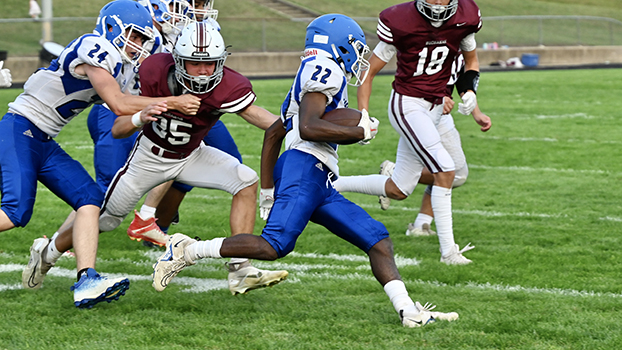 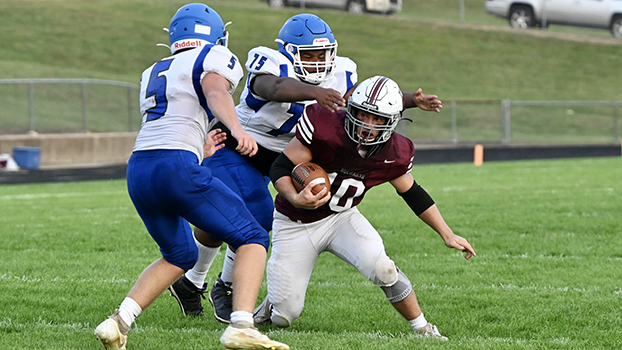 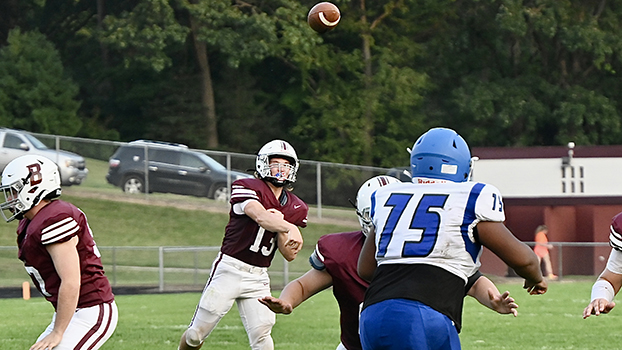 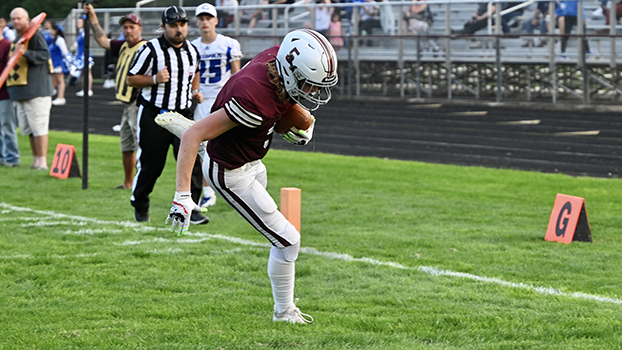 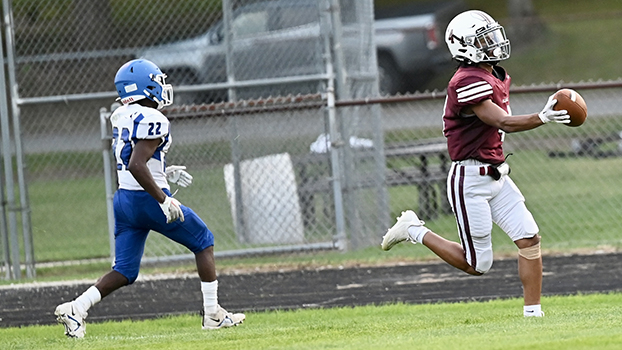 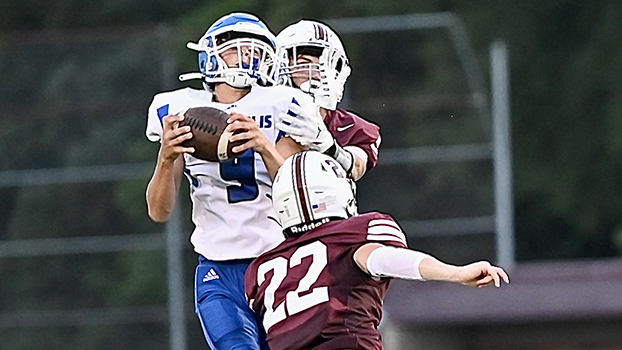 BUCHANAN — Visiting Cassopolis may have thought it was in a horror movie at Memorial Field in Buchanan Friday night.

It may not have been Friday the 13th, but on this Friday night, the No. 13 was the thing of nightmares for the Rangers.

Senior Buchanan quarterback Connor Legault terrorized Cassopolis by going 8-for-8 passing for 166 yards and four touchdowns in the Bucks’ 66-6 victory.

The win was the second straight for the Bucks, who improved to 3-1 on the season.

Legault added 34 yards on the ground on two carries, while as a starting linebacker, he had 1.5 tackles with an interception, which he returned for a touchdown.

The Bucks finished the night with 291 yards in total offense. Buchanan threw for 215 of those yards and rushed for another 76.

After scoring 32 points in the opening quarter against Dowagiac the previous week, the Bucks improved on that by scoring five times in the opening 12 minutes to open up a 38-0 lead.

Legault connected with Jack Ruth for a 36- yard touchdown pass to open the scoring before hitting Nico Finn for an 18-yard score to make it 16-0 after Finn and Leland Payne scored the 2-point conversions.

The final touchdown of the opening quarter was another Legault touchdown pass, this time to Jaman Brown, which covered 28 yards. With the conversion run coming up short, the Bucks took a 38-0 lead into the second quarter.

A pair of Finn runs in the second quarter allowed Buchanan to head into halftime with a 52-0 lead. His first runs covered 7- and 3-yards, respectively. Payne added a 2-point conversion, while the second conversion attempt failed.

The Bucks scored its final two touchdowns in the third quarter as Thomas VanOverberghe caught a 49-yard pass from Jake Franklin and the interception that was returned for the final score.

Cassopolis (0-4) averted the shutout when Anthony Higgins scored on a 5-yard run. The conversion kick failed.

Cassopolis will look for its first win of the season Friday night when it hosts Decatur for homecoming. Buchanan heads to Kalamazoo to face Loy Norrix in another non-conference contest.