Roundup: Rangers win, but not happy with effort; Eddies, Vikings pick up sweeps 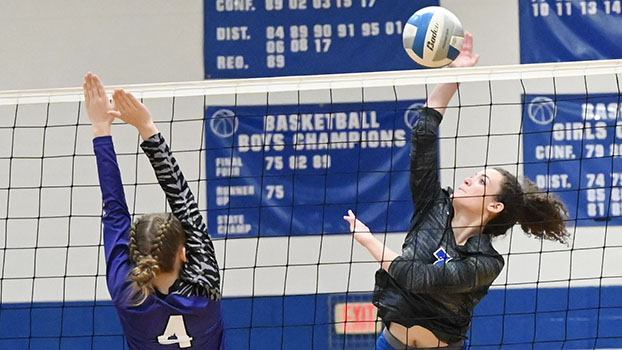 CASSOPOLIS — Veteran Cassopolis Coach Kaisha Martin will take the Rangers’ 3-1 win over Comstock in Southwest 10 Conference play Thursday night, but that does not mean she is happy about it.

“This game was very rough,” she said. “Although we are grateful for the win and had amazing moments, we are not happy with our performance due to playing at the other team’s level. This game was a very humbling experience to make sure we don’t take anyone for granted and also making sure we focus on the fundamentals that we work on during practice. This experience also allowed us to be aware that we have to play aggressively from start to finish and don’t take anything lightly because the underdogs can always rise.”

Ryli Burks had nine kills and 16 assists for the Rangers, who also got six kills and three blocks from Ella Smith. Atyanna Murray finished with five kills, two blocks and an assist, while Alexis Millirans added 21 digs, three kills and a pair of aces.

The visiting Bobcats improve to 11-2-2 on the year with a sweep of Berrien Springs in Lakeland Conference action.

The Eddies remain in the thick of the Wolverine Conference championship race following their 25-10, 25-13 and 25-13 win over host Vicksburg Thursday night.

The Vikings remain tied with Edwardsburg behind Wolverine Conference leader Otsego with their 25-18, 25-20 and 26-24 victory over host Three Rivers Thursday night.

Buchanan made short work of visiting Benton Harbor as it defeated the Tigers 25-2, 25-3 and 5-2 in its Lakeland Conference match.

The win improved the Bucks to 10-1 on the season and 1-0 on Lakeland matches.