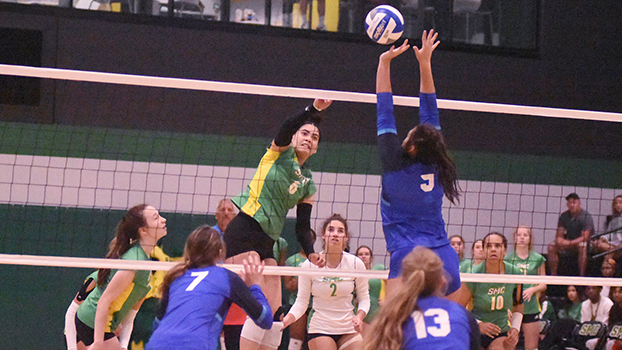 DOWAGIAC — One would never know that the Southwestern Michigan College volleyball team had not played a match in two weeks.

“I was really proud of our sweep tonight,” said first-year Roadrunner Coach Jenny Nate. “We are coming off of a two-week break, and we were able to come out and execute, focus in on our offensive and defensive goals, and play clean, smart ball. Our energy was awesome the first part of the match and the end of the match, and when our energy is up, we go on crazy, amazing runs. We played steady and focused the entire match, but our goal moving forward is to maintain that high level of energy from start to finish every point the entire night in order to really push points and control the tempo of the match.”

Some of that energy was provided by the large and boisterous crowd that came out to cheer on Southwestern. Tuesday night’s match was the first since students returned to the Dowagiac campus, as well as being the first weeknight contest of the 2022 season.

“Our home crowd also definitely played a part in the victory, and we truly appreciate all the support we are getting from SMC and the surrounding communities,” Nate said. “The gym was electric, and the crowd adds to our team’s momentum. We have a big week next week with three matches, and the team is excited to head back to practice and prepare for our next conference match next Tuesday against Ancilla.”

The Roadrunners will take their 7-3 overall and 1-0 Western Conference records into those matches.