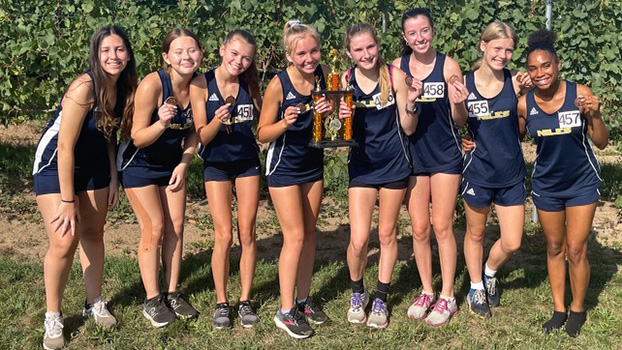 The Vikings, led by Mary Saylor’s sixth-place finish, ended up with 37 points to edge host Fennville, which finished with 39 points. Comstock Park was third with 53 points.

The Niles boys cross country team was third behind River Valley and Allegan.

Complete results may be found online at leaderpub.com in Daily Data.

The Buchanan Bucks won the boy’s freshman-sophomore championship at the Centreville Invitational Saturday.

Buchanan finished with 38 points to easily outdistance runner-up Union City, which finished with 55 points. Edwardsburg was third with 69 points.

Jack Sherwood led the Bucks with a fifth-place finish and a time of 18:35.

Edwardsburg was led by Maguire Johnson, who placed ninth with a time of 18:54. Brandywine was led by Elijah Gamble’s 62nd place finish and time of 23:16.

In the boys’ junior-senior race, Edwardsburg finished fifth and Buchanan 10th. Lakeshore was the team champion.

Dane Bailey finished sixth to lead the Eddies with his time of 18:02. Britain Phillip led Buchanan with a time of 20:24, which was good for 21st place. Robert Hartz was 25th for Brandywine with a time of 20:44.

Edwardsburg’s Claire Ritchey was the overall winner in the junior-senior race with her time of 21:49.

The Eddies finished second to champion Schoolcraft. The Eagles finished with 46 points and Edwardsburg with 48 points.