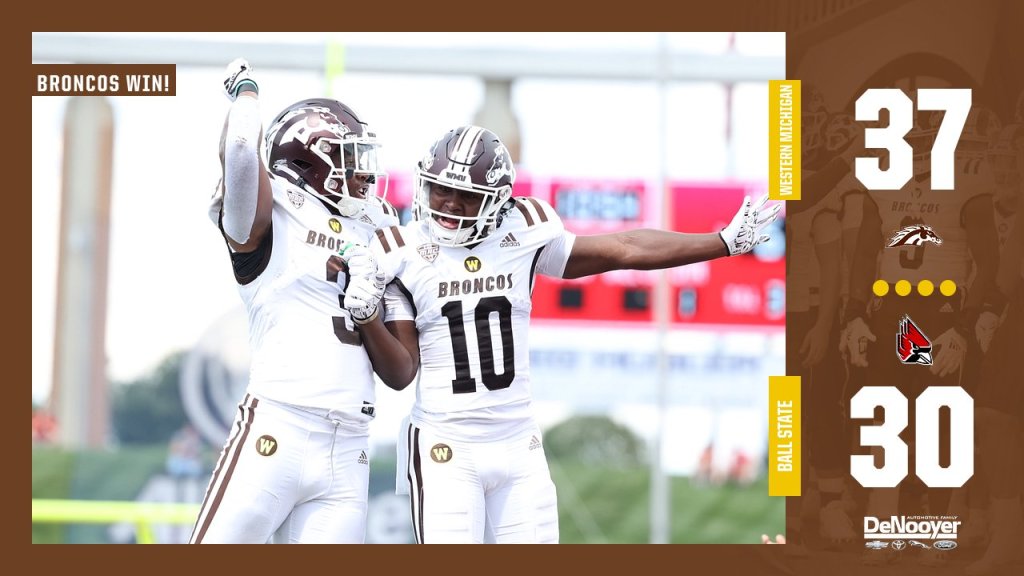 MUNCIE, Ind. — The Western Michigan football team outscored Ball State 23-14 in the second half to come from behind and defeat the Cardinals 37-30 on the road at Scheumann Stadium on Saturday afternoon.

The Broncos improved to 1-0 in Mid-American Conference play with the win and are now 6-0 in MAC openers under head coach Tim Lester.

Senior running back La’Darius Jefferson had three touchdowns on the ground to lead WMU, but it was Sean Tyler and his 60-yard run to the endzone that sealed the win. Tyler finished the day with a team-best 108 yards on the ground. Redshirt freshman quarterback Jack Salopek threw for a new career-high 230 yards and a touchdown, while running for 30 yards on seven carries. Wide receiver Corey Crooms had a game-high and career-high 10 receptions for 102 yards and a touchdown.

Zaire Barnes led the Broncos with nine tackles, while six other players had five tackles, including Braden Fiske, who had a tackle for loss, fumble recovery and a pass breakup.

Western Michigan was down 16-14 heading into the third quarter and had been held to just 58 yards rushing in the first half. The Cardinals added to their lead, pushing ahead 23-14 after taking advantage of a short field from a muffed punt by Zahir Abdus-Salaam.

From there, the Broncos took over the game and outscored the Cardinals 23-7 the rest of the way.  The comeback started with Jefferson capping off an 8-play, 75-yard drive with his third touchdown of the game. Salopek hit Crooms for a 20-yard gain early in the drive and a Ball State lineman roughed Salopek on the play to push the ball all the way to the BSU 29. Salopek then hit Josh Burgett for 17-yards down to the 11 before Jefferson took two plays to run it in.

Western Michigan forced a three-and-out on the next drive and got the ball back on its 46. The Broncos were faced right away with a 4th-and-3 from the Ball State 49 and elected to go for it, with Salopek finding Crooms for a five-yard gain and a first down. Tyler got WMU down to the 28 on three straight rushes. The third quarter ended with WMU on the Cardinal 12 and the opening play of the fourth quarter Salopek hit Crooms in the endzone on the right side of the sideline, with Crooms keeping one foot in bounds for the touchdown. The touchdown pass was the first of Salopek’s career. WMU went for two to push ahead 29-23, with sophomore wide receiver Anthony Sambucci took the ball on a trick play and passed it to Salopek in the endzone for the conversion.

The Cardinals responded with a quick scoring drive and a 39-yard touchdown pass from John Paddock to Amir Abdur-Rahman to retake the lead, 30-29.

The Broncos turned it over on the ensuing drive, with Salopek throwing an interception at the Ball State 16. The Cardinals were flagged for an illegal block on the return and were pushed back to their own eight. WMU forced a punt and Abdus-Salaam was interfered with on his fair catch, giving the Broncos the ball on their 40. Tyler took it to the house for a  60-yard touchdown run on the next play and WMU successfully went for two against to take a 37-30 lead.

Western Michigan got a turnover on downs after Dorian Jackson broke up a pass by Paddock. WMU ran down the clock but was faced with a 4th-and-1 from its 47. Jefferson took it for five yards for the first down to seal the victory.

WMU was held to just 58 yards in the first half before busting out for 145 in the second half. The Bronco offense finished with 437 yards on the day.

Western Michigan welcomes ACC champions Pitt to Waldo Stadium on Saturday for a 7:30 p.m. kick off. Tickets are available at wmubroncos.com/tickets.

Fans can join Buster’s Block Party beginning at 3:30 p.m. with activities and entertainment, followed by a concert by country music star Chase Bryant beginning at 5:30 p.m.